One of the most exciting aspects of working in a museum is the chance to make new discoveries. This spectacular pietre dure, or hard stone, panel depicting a vase filled with brightly colored flowers (Figure 1) has a fascinating history. In 1964, it came to the Museum as part of a larger gift of furniture and decorative arts. The panel had been mounted onto an iron base, and functioned as a decorative table (Figure 2). For decades, it was thought to be a nineteenth-century historicist work. Not surprising, as much decorative art and design during this period was derivative of an earlier aesthetic. However, in 2007, visiting scholars made a stunning revelation—our nineteenth century table was, in fact, a long-lost work commissioned by the Medici family in the early 1600s.1 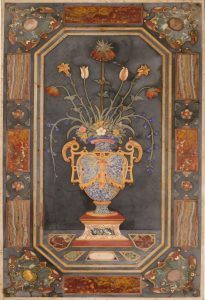 Figure 2. Close up of iron base utilized to turn this wall panel into a table. 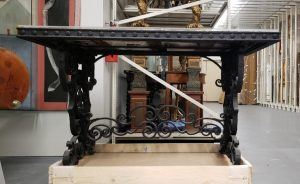 The Museum’s hard stone panel was one of a series that once decorated the walls of a small chapel in the Villa del Poggio Imperiale, a Medici palace outside of Florence. Records indicate that floral designs, such as the MFA’s, would have been interspersed with complementary panels depicting blossoming orange trees (Figure 3). In the last decades of the eighteenth century, the villa was renovated in the Neoclassical style, and the inlaid stone panels were removed. While the original number produced is unknown, a 1789 inventory, found in the archives of the Galleria dei Lavori, lists eleven panels from this suite. These were dispersed and sold in the last half of the nineteenth century.2 Currently, only six are known to still exist—one is in the collection of the Fine Arts Museum of San Francisco, two belong to the Museo dell’Opificio delle Pietre Dure, two are in the Victoria & Albert Museum collection, and lastly, ours—the most recent to be discovered.

Figure 3: Panel depicting a blossoming orange tree, on display at the Victoria and Albert Museum in 2018. The V&A holds the only known example of this design. 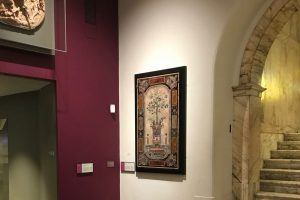 Pietre dure is a highly-detailed, complex inlay process in which a skilled artist uses thin slices of marble and semi-precious stones to form a composition. Similar to marquetry in woodworking, pietre dure is often used to embellish furniture and other decorative objects. While the process loosely has origins in antiquity,3 it was popularized in Florence with the establishment of the Galleria dei Lavori (later renamed the Opificio delle Pietre Dure) by Grand Duke Ferdinand I de’Medici in 1588. The background of the MFA’s panel is composed of black Belgian marble. According to Annamaria Giusti, former Director of the Museo dell’Opificio delle Pietre Dure, such panels are among the first examples of black marble being utilized as a ground for Florentine mosaics.4 This dark surface gives the stones that comprise the design, including agate, jasper, verde antico marble, and Lapis Lazuli, an incredible richness and lustre. Pietre dure was highly fashionable in the seventeenth and eighteenth-centuries and numerous exquisite examples exist— many depicting floral still lifes, such as the one belonging to the MFA.

Although objects of pietre dure appear durable, they are in fact quite delicate. There is no documentation regarding the condition of the panel when it came to the Museum in 1964, so it is difficult to know if it degraded in the last fifty years. However, there are various issues that currently make displaying it impossible, including cracked, loose, and missing stones (Figure 4). Thanks to the generosity of the Collectors Circle, a support group that raises funds for significant acquisitions for the MFA, we are finally able to conserve this spectacular panel, allowing visitors to once more view it as originally intended.

RLA Conservation, Inc., based in Miami and Los Angeles, was contracted to take on this important task. Recently, RLA conserved the Museum’s set of Antioch mosaics, and we are thrilled to be working with them once again. Conservation goals for this project include removing the iron table legs, which are not original and likely added around 1900, carefully cleaning decades-old grime from the surface, and repairing loose and damaged stonework.

Progress is already well underway; check back for updates!