Fay Mackey elected as Trustee Emerita at the MFA 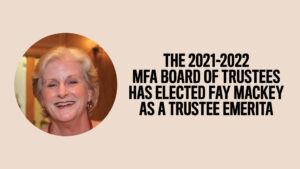 The 2021-2022 MFA Board of Trustees has elected Fay Mackey as Trustee Emerita, an honorary lifetime position and looks forward to her continued involvement, sharing her insights on a museum she loves and introducing new trustees to this exceptional institution.  The Museum of Fine Arts will continue to benefit from Fay’s knowledge, commitment, and perhaps most of all, her heart and spirit.

Fay grew up at the Museum of Fine Arts, St. Petersburg. Her great-aunt Margaret Acheson Stuart founded the MFA, the city’s first art museum. Mrs. Stuart asked her nephew and Fay’s father, Charles W. Mackey, to serve on the first Board of Trustees and elected him as Vice President. He continued his leadership role as Board Chairman and later as President for 10 years. When he retired, the Board named him President Emeritus.

Mr. Mackey is one of the most impressive figures in the Museum’s history. He almost single-handedly raised the funds to double the galleries from 10 to 20 and to add a second floor for administrative offices, a classroom, and a library by 1989. He initiated the Challenge Fund, now Annual Giving, and always provided a substantial lead gift. He was also a major sponsor of numerous exhibitions.

One of the Museum’s largest galleries is named in honor of Fay’s paternal grandfather, Cyrus Fay Mackey. Funds for its construction were provided by Fay’s grandmother.

When Fay returned to St. Petersburg in 1998, she took up the family mantle. The MFA has never been just a museum for Fay. It is truly part of her DNA. She began as a trustee in 1999, alternating on and off the Board over the years. She served on the accessions and membership committees and chaired the education committee. She was selected to chair the Museum’s 50th Anniversary Celebration in 2015.

Fay has also been a very active member of The Margaret Acheson Stuart Society, assisting with many fundraisers. She co-chaired the Fashion Show in 2010 with Dr. Dimity Carlson, the current Chair of the Board of Trustees.

As a Museum trustee, Fay has always believed it was important to keep the rich traditions of the MFA alive as the institution has moved forward. She has a perspective that spans the history of the institution, beginning with childhood memories. Rarely has one family played such an important role in the development of an American art museum.  Board members look forward to working with Fay for years to come.