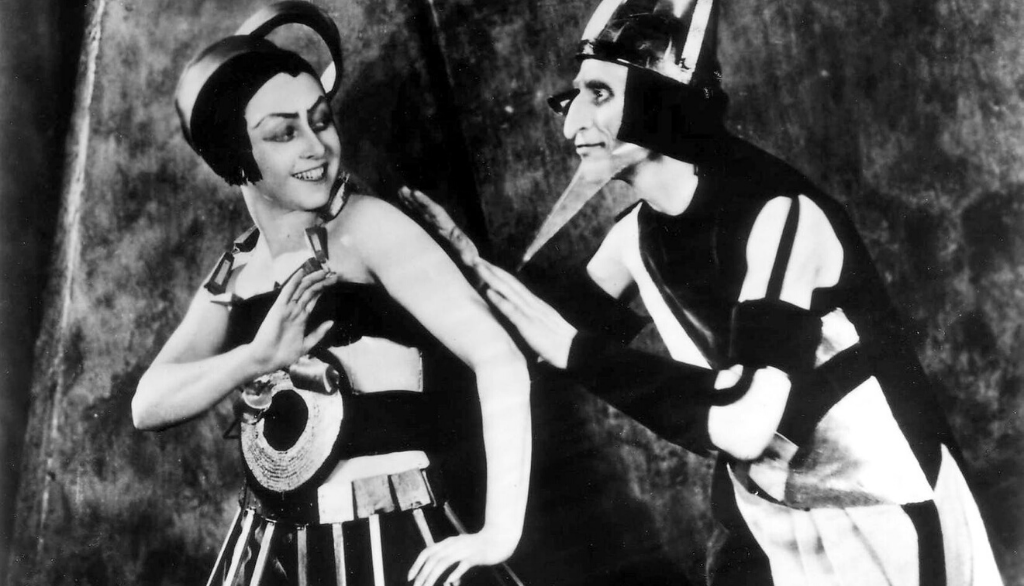 A rarely-seen silent film from Russia, Aelita, Queen of Mars is based on a 1923 novella by Aleksey N. Tolstoy, a cousin of War and Peace author Leo Tolstoy. The film, a highly stylized look at the harsh conditions Soviet citizens faced during the Civil War, was created, in large part, to support the goals of the Bolshevik Revolution, and was promoted like no Soviet film before it. Leaflets announcing its premiere were dropped from airplanes over Moscow, and it was considered one of the most expensive films made in Russia at the time.

Aelita is truly groundbreaking in both design and that it is the first ever film to depict space flight. The plot centers on Los, a young man traveling to Mars in a rocket ship, where he leads an uprising against the ruling group of Elders, with the support of Queen Aelita who has fallen in love with him after watching him through a telescope. When it premiered in Leningrad, composer and pianist Dmitry Shostakovich played the music he provided for the film live at the theater.

Today, Aelita is remembered primarily for Alexandra Exter’s Martian designs, which have been a staple of fashion shoots for decades. A leader of the European avant-garde, she created a unique “cubist style distinguished by a remarkable variety of color,” according to art historian Georgii Kovalenko.

La Lucha will perform live to the film, premiering their brand new score to Aelita — providing greater dimension to this stirring tale of revolution. The band, one of the most celebrated in the region, brings to each performance distinct rhythms from various musical traditions, including jazz, Latin music, and classical. The band, consisting of Alejandro Arenas on bass, John O’Leary III on piano, and Mark Feinman on drums, aim to create music that transcends genres and classifications, considering each performance live art which will continue to breathe, grow, and evolve.

Want to enjoy more interesting talks and events during this special exhibition? Check out our full schedule here! MFA Members enjoy free admission for 12 months, early access to special exhibitions, discounts at our Store and Café, reciprocal benefits to hundreds of museum across the country, and more.

NOT YET A MEMBER? BECOME A MEMBER TODAY FOR EARLY ACCESS TO EXHIBITIONS.