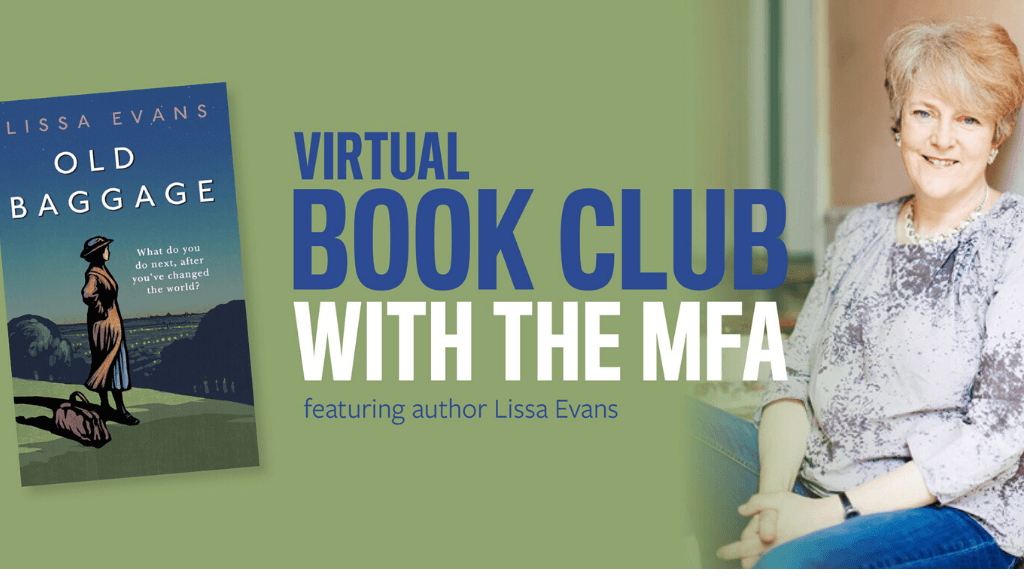 In 2020, the Book Club at the MFA joins in the national celebration of the ratification of the 19th Amendment, which granted women in the US the right to vote. And now we’re doing it virtually, with Zoom. Author Lissa Evans will be joining us online all the way from England. This book club is free but registration is required and will be limited to 100 participants. Register here: https://bit.ly/3dG6SOa

Evans has written four additional novels for adults: Spencer’s List, Odd One Out, Their Finest Hour and a Half (which was made into a film) and Crooked Heart, the last two both long-listed for the Baileys Women’s Prize for Fiction.

Old Baggage, a comic, charming portrait of a once pioneering suffragette trying to find her new passion in post-WWI era London. Books are available for pick up at St. Pete’s Tombolo Books (727) 755-9456, online via Amazon Kindle and other online retailers.

1928: Riffling through a cupboard, Matilda Simpkin comes across a small wooden club—an old possession that she hasn’t seen for more than a decade. Immediately, memories come flooding back to Mattie—memories of a thrilling past, which only further serve to remind her of her chafingly uneventful present. During the Women’s Suffrage Campaign, she was a militant who was jailed five times and never missed an opportunity to return to the fray. Now in middle age, the closest she gets to the excitement of her old life is the occasional lecture on the legacy of the militant movement.

After running into an old suffragette comrade who has committed herself to the wave of Fascism, Mattie realizes there is a new cause she needs to fight for and turns her focus to a new generation of women. Thus the Amazons are formed, a group created to give girls a place to not only exercise their bodies but their minds, and ignite in young women a much-needed interest in the world around them.

Old Baggage is a funny and bittersweet portrait of a woman who has never given up the fight and the young women who are just discovering it.