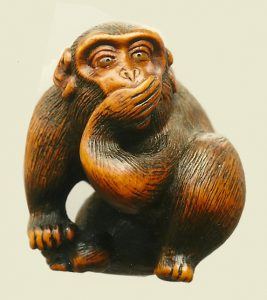 The decorative arts – fine furniture, jewelry, ceramics, and glass – are all around us and in the Museum of Fine Arts. The Friends of Decorative Arts (FODA) expands understanding of their variety and beauty. Plus, you will make new friends at the meetings. Annual dues are $20 in addition to Museum membership.

FODA programs are held on the second Tuesday of the month at 2 pm during the season. FODA members attend for free. Non-FODA members can attend for $5, plus MFA admission. Carolyn Nygren is the volunteer coordinator.

This month’s talk is on Netsuke by Bob Levenson. Netsukes are small Japanese art objects that are both decorative and functional. Since kimono had no pockets, fashionable Japanese men used netsuke to anchor personal belongings to the sash around their waist. We shall discuss the materials, types, subjects, carving, carvers, and collecting of netsuke. Attendees are welcome to bring some of their own netsuke for discussion and examination.

Bob Levenson has been collecting Japanese art for over 35 years, and is a long-time member of the International Netsuke Society, having lectured at several of their international meetings. Other interests in Japanese art include woodblock prints and art of the early 20th century. Bob and his wife, Mary, have resided in the Tampa Bay area for over 35 years.  He is a retired physician.

Mary Levenson reminisces about the genesis of the collection. “In 1980 a poster of the three-eyed goblin Mitsume Kozo triggered Bob’s imagination and sent him on a voyage of collecting Japanese art for more than three decades. Bob began collecting netsuke, the beautifully carved toggle that helps support an inro, originally a tobacco or medicine pouch, on a man’s obi, or kimono sash. Very shortly, he became enamored with additional aspects of Japanese culture, and this fascination spread to woodblock prints, cloisonné, and other wonders created by master Japanese craftsmen. The art deco architecture of South Florida, where we live, also appealed to him and naturally these two interests fused into collecting Japanese art deco.”

Click HERE to find out more on membership in FODA.