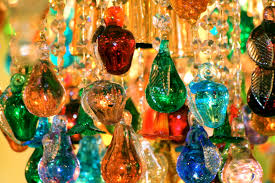 Studio Salvadore is a collaborative glass-production enterprise headed by brothers Marco and Mattia Salvadore in Murano, Italy. They began working with their father Davide in the studio Campanol & Salvadore as young boys. Marco was a presenter at the 2009 Glass Art Society and has traveled the world to teach. Mattia has studied with a variety of Muranese masters and at the Pilchuck Glass School and has worked at the famous Venini glass factory.

The two artists emphasize graceful, elliptical shapes that frame the layered colors emerging from the glass. Their “fresh tone” palettes give to their overall designs a fresh, contemporary look.

Pietro and Ricardo Ferro followed in the footsteps of father Paolo, and, under his leadership, learned the art of grinding. The Ferros have collaborated with such masters as Lino Tagliapietra and such companies as Venini, Barovier & Toso, and Seguso.

Thank you to our sponsor for their continued support