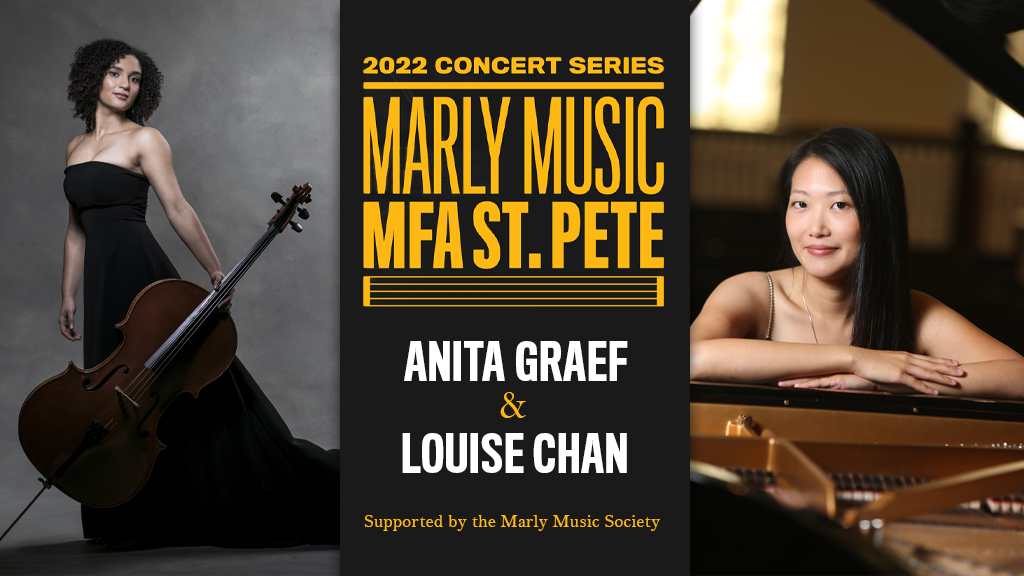 Described as “a world-class musician” (Galena Gazette) who plays with “high energy and polish” (WQXR), cellist Anita Graef has earned recognition as a soloist, chamber musician, and orchestral performer. Notable appearances include features in Strings Magazine, as well as Carnegie Hall’s Weill Recital Hall and Concerts from the Library of Congress. She serves as the Artistic Director and cellist of the Juliani Ensemble, an innovative, multi-faceted chamber ensemble, which has performed extensively both nationally and internationally. Highlights of 2021/2022 include concerto debuts, notably with the Louisville Orchestra among others, recital performances at Columbia University, the New Lens Concert Series, “Live from WFMT,” and a residency at the University of Missouri. Anita was recently named the 2022 Gheens Young Artist, which sees her making her concerto debut with the Louisville Orchestra, as well as performing, speaking, and serving as an educator throughout the city. In 2021, she received the American Prize in Instrumental Performance. Her writing has been published in Strings Magazine, where she serves as a frequent contributor.

She obtained a Bachelor’s Degree from the University of Michigan’s School of Music, Theatre, and Dance, where she studied with Professor Anthony Elliott. She completed her Master’s Degree at the University of Cincinnati College-Conservatory of Music, under the tutelage of Ilya Finkelshteyn. When not making music, Anita enjoys reading, cooking, crocheting, weight lifting, hiking, spending time with friends and family, volunteer work and exploring new cities.

Louise Chan, a native, of Ottawa, Canada, is a versatile pianist with experience as a soloist, chamber musician, and orchestral keyboardist. She is a founding member of the Blue Violet Duo with violinist Kate Carter, and their duo has enjoyed repeat performances at the Myra Hess Memorial Concert Series. Their critically acclaimed debut album, American Souvenirs, was featured as WFMT 98.7’s Album of the Day. The duo’s sophomore album is currently in post-production and will be released by Centaur Records. Dr. Chan is dedicated to performing new music; recent performances in her home base of Chicago have included appearances at the Ear Taxi Festival and the George Crumb Festival, and with Fulcrum Point New Music Project and The Zafa Collective. She was the former principal pianist for the Madison Symphony Orchestra, and she continues to perform as an orchestral keyboardist with various ensembles in the Midwest.

As a music educator, Dr. Chan maintains a busy studio of young and adult piano students at the Music Institute of Chicago. Her students have been prizewinners at local and state competitions. She is a member of the Royal Conservatory of Music’s College of Examiners, and travels throughout North America as an adjudicator. She has served on the faculties of the Chicago Chamber Music Festival and the Chicago Duo Piano Festival. Her degrees are from the Eastman School of Music and Northwestern University.

$10 for Students (with current ID)