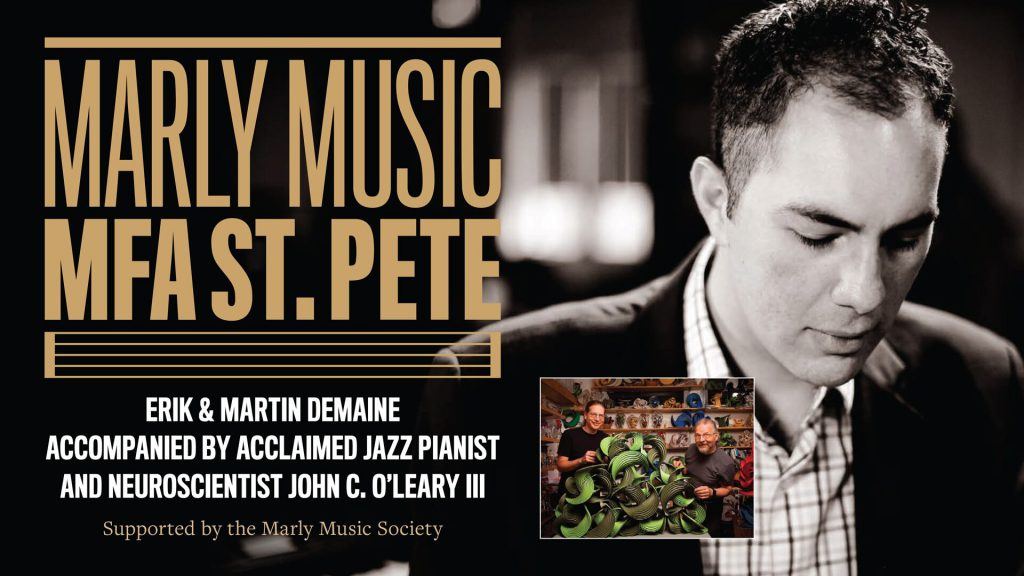 This event has sold out.  We are looking forward to seeing everyone during this special performance!

A father-son collaborative team, the Demaines fold, pleat, and twist paper into powerful sculptural forms that illustrate the intriguing and profound connections between mathematics and origami. They use mathematical calculations to create unconventional works that challenge the direction of paper folding. For years, the Demaines have been exploring the potential of curved folding, in which paper is folded along a curved, rather than a straight line. The two Demaines have 3 pieces of mathematical origami in the permanent collection of the Museum of Modern Art, New York; Martin and Erik are also featured in the movie Between the Folds, a documentary on modern origami.

John C. O’Leary III is a Mexican American jazz pianist, composer, AND neuroscientist. His musical compositions are born of John’s desire to combine music and science, and to bring his community closer to the scientific world. John feels that science and music are intimately connected and each exposes a truth about the human perspective.

Together, the three scientists/artists will create a performance piece based on the intersecting notions of left and right brain, perfectly blending art and science.  Just as the special exhibition Above the Fold celebrates artists who are redefining a traditional Japanese craft, the museum is excited to showcase artists inventing unexpected forms of artistic expression and celebrating the intersection of contemporary, traditional, and ancient forms of art.