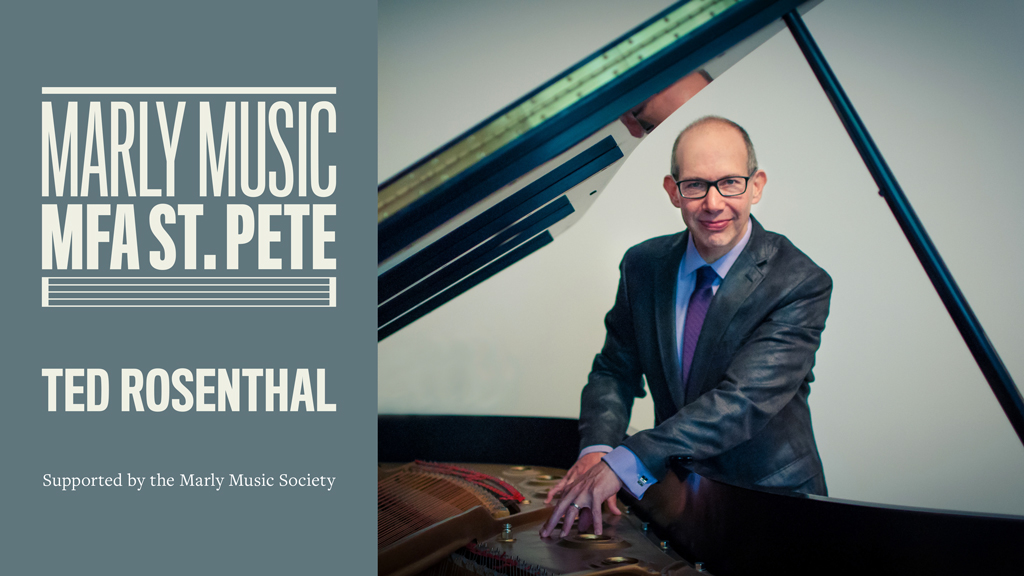 Ted Rosenthal is one of the leading jazz pianist/composers of his generation.  He actively tours worldwide with his trio, as a soloist, and has performed with many jazz greats, including Gerry Mulligan, Art Farmer, Phil Woods, Bob Brookmeyer, and James Moody.

Winner of the Thelonious Monk International Jazz Piano Competition, Rosenthal has released fifteen CDs as a leader. Rhapsody in Gershwin, which features his arrangement of Rhapsody in Blue for jazz trio, reached #1 in jazz album sales at iTunes and Amazon. Wonderland, was selected as a New York Times holiday pick, and received much critical praise: “Sleek, chic and elegant” –Howard Reich, Chicago Tribune. Impromptu, showcases his reimaginings of classical themes for jazz trio. “A serious listen to Impromptu will be a mind-changing experience…sit back and enjoy these wonderfully creative takes on ten compositions from the classical canon that have never sounded so cool.” –Elliott Simon, AllAboutJazz

Rosenthal’s solo album, The 3 B’s, received 4 stars from DownBeat magazine.  It features music of Bud Powell, Bill Evans and his improvisations on Beethoven themes. “In Rosenthal’s hands all this music sounds as though it sprang from the same muse, and that’s the sign of a skilled, imaginative artist.”  -David R. Adler, All Music Guide.

Rosenthal has also been commissioned by Alvin Ailey American Dance Theater, The Park Avenue Chamber Symphony, and Dallas Black Dance Theatre. “The Survivor,” his concerto for piano and orchestra, has been performed by the Manhattan Jazz Philharmonic and the Rockland Symphony Orchestra, with Rosenthal at the piano. Rosenthal premiered his second jazz piano concerto, “Jazz Fantasy,” with The Park Avenue Chamber Symphony.

Rosenthal was artistic director of Jazz at the Riverdale Y and Jazz at Dicapo Theatre, both in New York City. He has also performed with Wynton Marsalis and the Lincoln Center Jazz Orchestra, The Vanguard Jazz Orchestra, and Jon Faddis and the Carnegie Hall Jazz Band.  In addition, Rosenthal has been the pianist of choice for many top jazz vocalists including Helen Merrill, Ann Hampton Callaway, Kurt Elling and Barbara Cook. He appeared on Marian McPartland’s Piano Jazz on National Public Radio and performed with David Sanborn on NBC’s Night Music.

Rosenthal’s orchestral performances include solo and featured appearances with The Detroit Symphony, The Phoenix Symphony The Boston Pops, The Grand Rapids Symphony, The Rochester Philharmonic, The Pittsburgh Symphony and The Fort Worth Symphony. Rosenthal performed Gershwin’s Concerto in F and Rhapsody in Blue for the opening concert of the 92nd Street Y’s 2015-16 season. The New York Times called his playing “notable both for its flair and languid, sultry expressive gestures.” In 2014 Rosenthal performed Rhapsody in Blue at Town Hall in a concert celebrating the 90th anniversary of its premiere.

Rosenthal received his Bachelors and Masters degrees from the Manhattan School of Music. Active in jazz education, he is on the faculties of The Juilliard School, and Manhattan School of Music, where he also served on their Board of Trustees and received the Presidential Medal for Distinguished Faculty Service. Rosenthal presents jazz clinics throughout the world, often in conjunction with his touring. He was a contributing editor for Piano and Keyboard magazine and has published piano arrangements and feature articles for Piano Today, The Piano Stylist and The Juilliard Journal. Ted Rosenthal is a Steinway Artist.  His website is www.tedrosenthal.com

$10 for Students (with current ID)