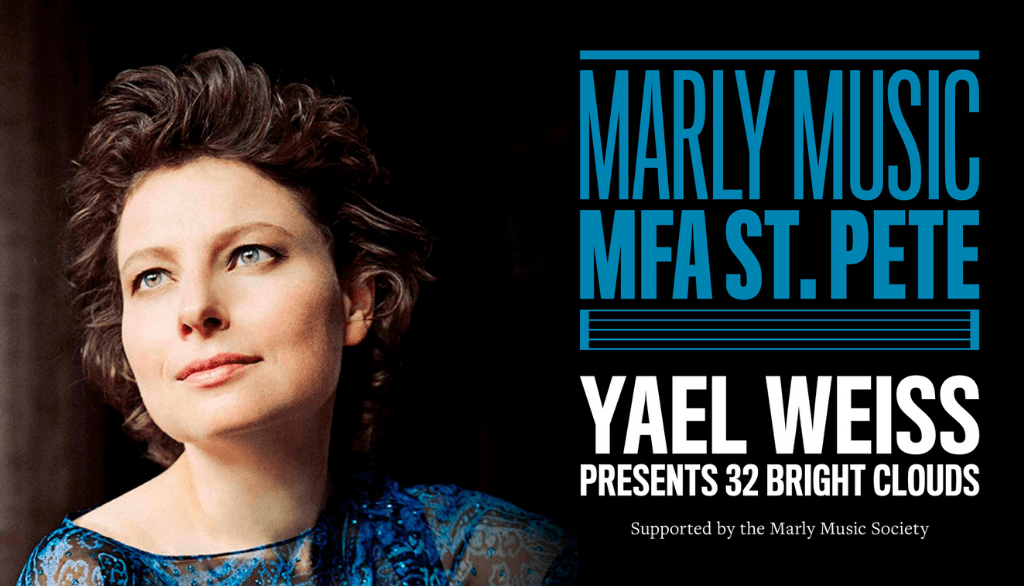 A captivating presence on the concert scene, award-winning Israeli-American pianist Yael Weiss has been hailed by many of today’s greatest musicians and critics for visionary interpretations of surpassing depth, immediacy and communicative power. Following a recent recital, the Washington Post portrayed her as “a pianist who delves deeply and tellingly into that cloudy area where fantasy morphs into improvisation, inventiveness being common to both. ”

Ms. Weiss has performed across the United States, Europe, Japan, Korea, New Zealand and South America at such venues as Carnegie Hall, Lincoln Center, The Kennedy Center, Benaroya Hall, Moscow’s Bolshoi Hall and London’s Wigmore Hall. Her New York recital debut, presented by the Metropolitan Museum, was acclaimed by the New York Times as, “remarkably powerful and intense….fine technique and musicianship in the service of an arresting array of music.” Ms. Weiss has appeared as soloist with many international orchestras, including Prague Chamber Orchestra, Jerusalem Symphony Orchestra, The Seattle Symphony, Santa Fe Symphony, Israel Chamber Orchestra, and the Brazil National Symphony to name a few.

32 Bright Clouds: Beethoven Conversations Around the World is a global music- commissioning, performing and recording project curated by pianist Yael Weiss. The project commissions a diverse group of composers from countries of conflict and unrest around the world, with all new works unified by a single “peace motif” from Beethoven, where he added the inscription “A Call for Inward and Outward Peace” above the notes. “32 Bright Clouds” aims to harness music’s great power for unity and peace.

Dedicated to the people of Ghana with psychiatric disorders, who are subjected to torturous and inhumane confinement.

Dedicated to victims of extra-judicial killings, whose voices have been unheard.

Dedicated to the bravery of Ahok, the imprisoned ex-governor of Jakarta

Dedicated tot he 150 young people whose lives were taken during the 2017 Peace demonstrations in Venezuela.

This concert is dedicated to the American-Israel Cultural Foundation in celebration of their 80th Anniversary.