Wayne W. and Frances Knight Parrish Lecture by Käthe Kollwitz of the Guerrilla Girls
FREE with Museum admission.
Reception to follow on the Museum portico.  Cash bar.
Sponsored in part by Martha and Jim Sweeny 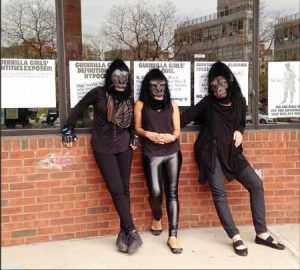 The Guerrilla Girls joined together in 1985 to protest the treatment of women artists by museums, galleries, critics, and scholars.  Using the primary medium of posters, they quickly became art world icons, who continue to spread their humor-laced activism today.  Members use pseudonyms based on the names of noted female artists and wear gorilla masks in their protests and appearances.  The MFA is thrilled to present founding member Käthe Kollwitz during the opening weekend of Marks Made: Prints by American Women Artists from the 1960s to the Present.

Each year, the Parrish Lecture brings outstanding speakers to the community.  The Parrishes, who lived most of their lives in Washington, D.C., donated many of the MFA’s most significant pre-Columbian objects.  They are displayed in a gallery named in their honor.  Mr. Parrish was a successful publisher of aviation magazines and Mrs. Parrish was Director of the U.S. Passport Office from 1955-1977.