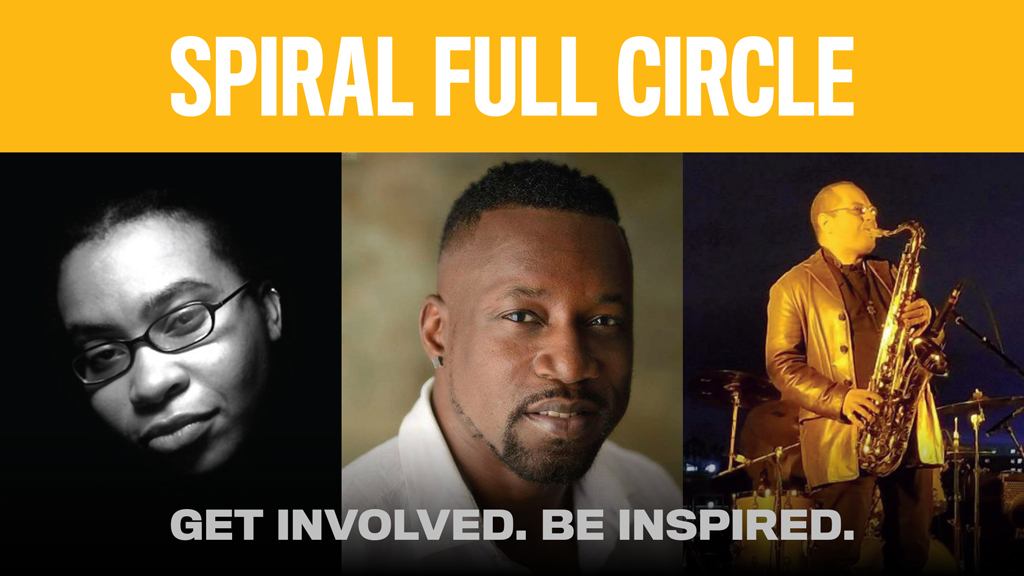 Join the MFA for a multi-genre evening of performances honoring the legacy of Spiral, a collective of Black artists formed in the mid-1960s around the time of the March on Washington for Jobs and Freedom. Focusing their mission on balancing activism with one’s personal artistic practice, these artists sought ways to engage with the Civil Rights Movement while negotiating individual aesthetic choices.

Free with museum admission.
Please note: Due to the uncertainties related to COVID-19, this event is subject to change.

About our performing artists

After time well spent in alphabet cities—NYC, ATL, and DC—Tenea lives near the Gulf of Mexico where she writes speculative fiction, makes music, and builds an arts & empowerment enterprise. In May 2020, Blueprints for Better Worlds was released, as well as the social good site, buildabetterworld.com. 2021 saw the release of Frequencies: a Fiction Album and Broken Fevers, of which Publisher’s Weekly wrote “the 14 hard-hitting, memorable short stories and prose vignettes in this powerhouse collection from Johnson…  are astounding in their originality.  Her short work appears in anthologies like Mothership: Tales from Afrofuturism and Beyond, Sycorax’s Daughters, and Blue and Gray: Ghost Stories from the Civil War. Her musical stories were heard at venues including The Public Theater and The Knitting Factory. Tenea also wrote a poetry and prose collection, Starting Friction. Her debut novel, Smoketown, won the Parallax Award. R/evolution, the first book in the Revolution series (which includes the novel, Evolution), received an honorable mention that year as well. Her virtual home is teneadjohnson.com. Stop by anytime.

Award-Winning Actor, Writer, Producer, Director, Spoken Word Artist, and Vocalist. He was part of the 2006 U.S. Olympic team for performing arts where he won 7 medals on the world’s largest stage including one gold, 4 silver, and two bronze against competitors spanning 52 countries in acting, modeling, spoken, and vocal performance. In 2018, Cranstan was awarded the Jackie Robinson Breaking Barriers Award by the city of St Petersburg, and the Tampa Bay Rays for Pioneering efforts in film and Determination. This honor solidified him into becoming the first African American to write, direct, produce, star in, screen and release his own full-length movie in his home city. Cranstan has starred in a number of motion pictures that he has written, directed, co-directed, and acted in that have all made significant impacts on the independent film market including the following: If You Only Knew, Loaded Love, King Charles, Loved, More than Friends, No Harm Done, Disconnected, The Serious Student, Love in Context and his most recent films, Art in the City, Agent X, Agent X 2, Simi and Nothing Else Matters the series which he is currently in production of the 4th and 5th episodes and recently screened his pilot for this at the and FilmFestival this past February at Sundial AMC. To his credit, He’s also starred in a number of stage plays professionally with American Stage, such as RENT, Two Trains Running, A Raisin in the Sun, & Pipeline. Cranstan serves as one of the Organizing Directors for the Sunshine City Film Festival, Black Art & Film Festival, and is the Executive Director of the Tampa Bay Actors Guild. He is also co-owner of his own film production company, DreamMakerz Productions, and currently serves as the Performing Arts Director for Pinellas County Job Corps where he runs the only performing arts program in the country for them. Though he wears many hats, Cranstan is grateful for each opportunity he receives that allows him to share his gifts while inspiring and empowering others to become their very best selves, live their finest art, and pursue their highest dreams.

Saxophonist Conrad “Butch” Thomas may be new to the charts in the United States, but he’s no neophyte to the global music industry. His career spans 30 years of featured performance and recordings by the likes of Jaco Pastorius, Lenny Kravitz, Queen of Soul Aretha Franklin, and Sting. Born and raised in St Louis, Missouri, he received his Bachelor of Fine Arts degree in Music (1983) from Webster University. Very soon after graduating, he relocated to New York City, where he established a relationship with the great instrumentalist and composer Jaco Pastorius (featured on Pastorius recordings “Punk Jazz” and “NYC Jam” and featured live from 1983-1987). Through a referral, the call came from superstar singer/guitarist Sting, where he toured extensively in 1996-97. It was through these appearances that he was placed in demand by yet another hierarchy of stars e.g. James Taylor, Elton John, Diana Ross, and a feature spot on the UK version of Aretha Franklin’s 1998 hit song “A Rose Is Still A Rose” written and produced by singer/songwriter Lauren Hill. As an independent artist, he was awarded the Gold Artist Winner from the 2008 Radio Indy Awards because of the quality of his debut recording, produced and engineered by none other than CD Baby founder, Derek Sivers.

This program is generously sponsored by the Art Bridges Foundation