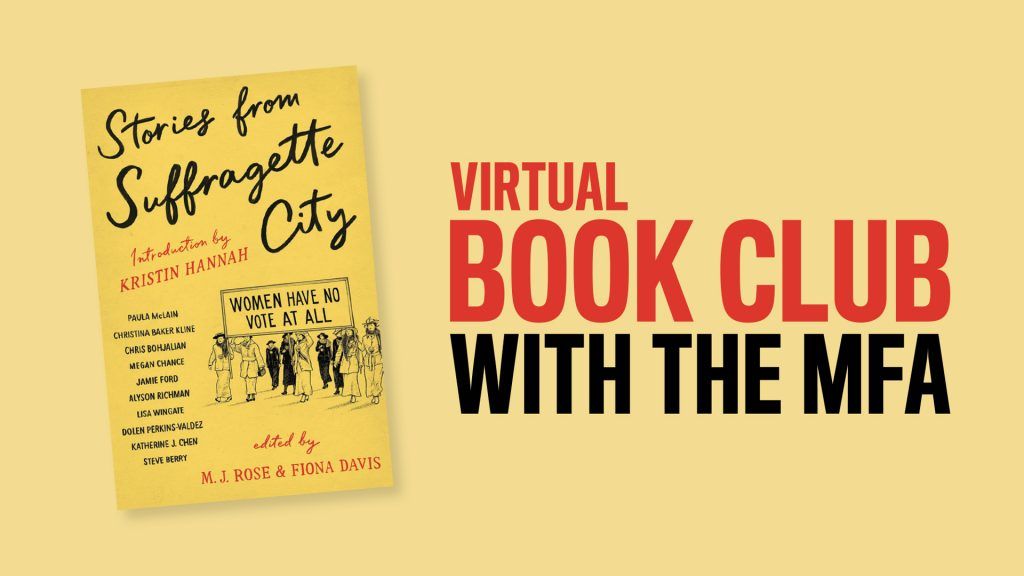 In 2020, the monthly Book Club with the MFA discussions are centered on topical issues and themes universal to all: empowerment, artistic and creative excellence, and the push for equality for all. In our final book club of 2020, we’re gathering to discuss Stories from Suffragette City. This collection, written by some of the most celebrated authors writing today, commemorates and celebrates the battles women faced in fighting for the right to vote. Free for everyone!

The stories focus on women of different ages, backgrounds, and ethnicities, bringing the powerful tale of the suffrage movement alive. The characters depicted in the book, some well-known, others unfamiliar, each inspire and reinvigorate the power of democracy. We follow a young woman who is swept up in the protests when all she expected was to come sell her apples in the city. We see Ava Vanderbilt as her white-gloved sensibility is transformed over the course of the single fateful day. Ida B. Wells battles for racial justice in the women’s suffrage movement so that every woman’s voice can be heard. Each story stands on its own, but together Stories From Suffragette City becomes a symphony, painting a portrait of a country looking for a fight and ever restless for progress and equality.

With an introduction by Kristin Hannah and stories from: