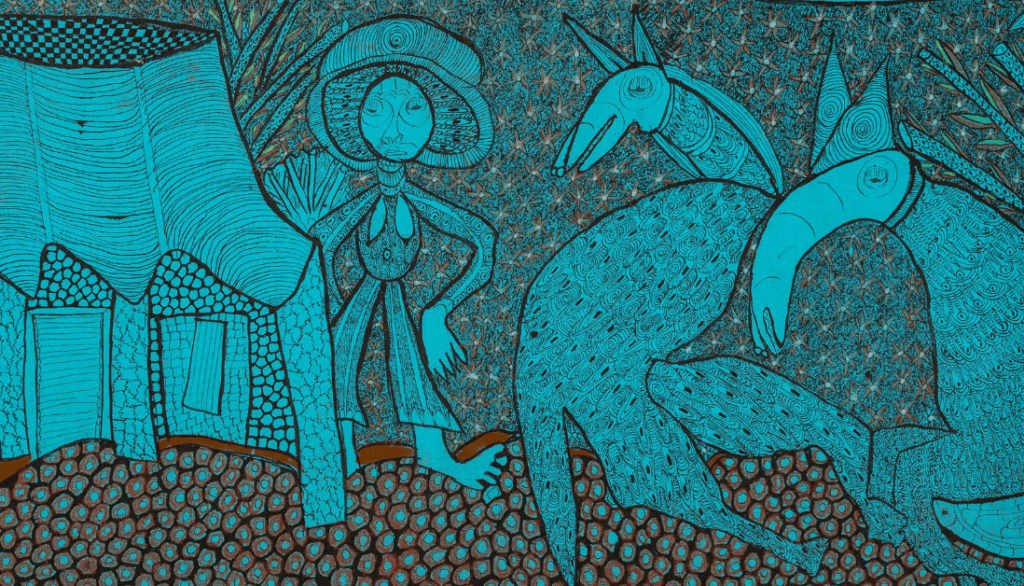 Known by the translation of his title and name, Prince Twins Seven-Seven (Nigerian, 1944–2011), was the only surviving child out of seven pairs of twins born to his mother. Because of this, and the associated traditional religious beliefs of the Yorùbá people of Nigeria, he held that he possessed unique spiritual insight and power. His perceptions in turn had a profound impact on his artistic expression as a printmaker, painter, and sculptor. This exhibition, which is largely drawn from the MFA’s collection, explores the visionary world of Prince Twins Seven-Seven. Blending abstracted images of the physical world and evocations of the spirit world, the artist created a unique, powerful, and international style that bridges traditional and contemporary arts.

Prince Twins Seven-Seven began his artistic life in a band, singing, and dancing. He shifted his attention to the visual arts after participating in a workshop established by Ulli Beier (German, 1922–2011), in Osogbo, Nigeria in the late 1960s. There he was encouraged to explore different types of media as well as the literature of Nigerian author Amos Tutuola (Nigerian, 1920-1997), ultimately leading him to create a distinctive style that remains rooted in the physical environment even as it evokes otherworldly visions. His work is thus akin to the literary genre of Magical Realism, which creates a realistic view of the world while at the same time adding supernatural elements to blur the lines between spirits and humans.

One of the features of this exhibition is the MFA’s holdings of early Prince Twins Seven-Seven prints in different states. These provide a unique view into his working process during the first half of his career. Likewise, this exhibition focuses upon the MFA’s collection of his textile paintings and a drawing from the 1970s. Most of these objects reflect traditional Yorùbá art and are displayed with art from that culture. At the same time, however, Prince Twins Seven-Seven’s work also shows how he was able to combine Yorùbá artistic legacies with his own unique sense of color, pattern, and evocations of spirits and dreams. Multiple: Prince Twins Seven-Seven offers a remarkable opportunity to examine the complicated, richly symbolic work of the artist, who relied both upon artistic legacy and innovation. The artist’s paintings, prints, and drawings also powerfully repudiates the frequently misconceived division between the traditional and contemporary in African art.

This exhibition occurs in the Minck Gallery, which is supported by the Helen and Richard Minck Memorial Fund.