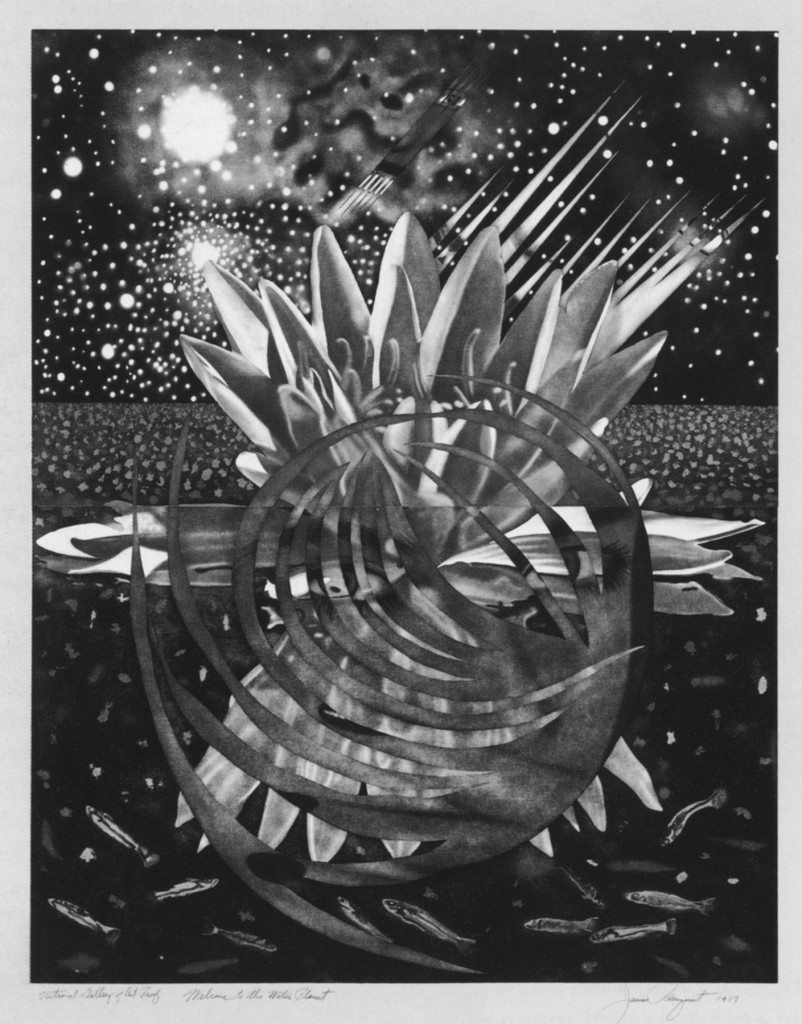 Robert Rauschenberg and James RosenquistImages from Everywhere, Prints and Photographs

Above: James Rosenquist, Welcome to the Water Planet (1987), Aquatint on paper, Gift of Iris and E. Stan Salzer, Published by GraphicStudio, University of South Florida, Tampa, 2007.31

This exhibition will present approximately 30 works on paper, including a number of photographs by Robert Rauschenberg (1925-2008). They are extraordinary gifts to the Museum from Donna and Thomas Brumfield Jr. and Iris and E. Stan Salzer, along with extended loans from the latter couple. Hazel and William Hough Chief Curator Jennifer Hardin will curate the show.

Images from Everywhere displays a wonderfully personal solvent transfer drawing by Rauschenberg, inscribed “FOR RICK FROM DAD BY RAUSCHENBERG 81.” The collage-like drawing, created for a friend, brings together his interest in technology and space exploration with nature and also evokes Florida from which so many space missions have been launched. Rauschenberg’s solvent transfer drawings are produced by dissolving images and words from print media in a solvent and then rubbing them onto paper with a pencil—a technique he developed.

His photographs offer insights into what caught his eye—from sections of buildings and odd juxtapositions in the urban landscape to a personal moment shared by another great artist and friend Jasper Johns with his then wife Lois. Rauschenberg was influenced by the more abstract images of Aaron Siskind, whom he met and admired and who is also represented in the MFA collection.

James Rosenquist (born 1933) has also explored popular culture in his work. Early in his career, he supported himself by painting huge billboards above Times Square and along with Rauschenberg and Johns, designed windows for Bonwit Teller and Tiffany & Co. in New York. Throughout his life, he has been fascinated by the images which bombard us every day and later, by the light, colors, water, and landscape he discovered in Florida.

The magnificent Welcome to the Water Planet (1987), a gift from the Salzers, reveals his passion for the environment. The large-scale work is powerfully connected to Florida, with its water, fish, and central tropical plant sporting spiky leaves. It reminds us that water is our foundation.

Images from Everywhere is a tribute to these American masters, as well as to the donors, the Brumfields and Salzers. As the MFA prepares to celebrate its 50th anniversary, this choice exhibition spotlights the dynamism of the collection and the generosity of donors who continue to share the work they love with the public.