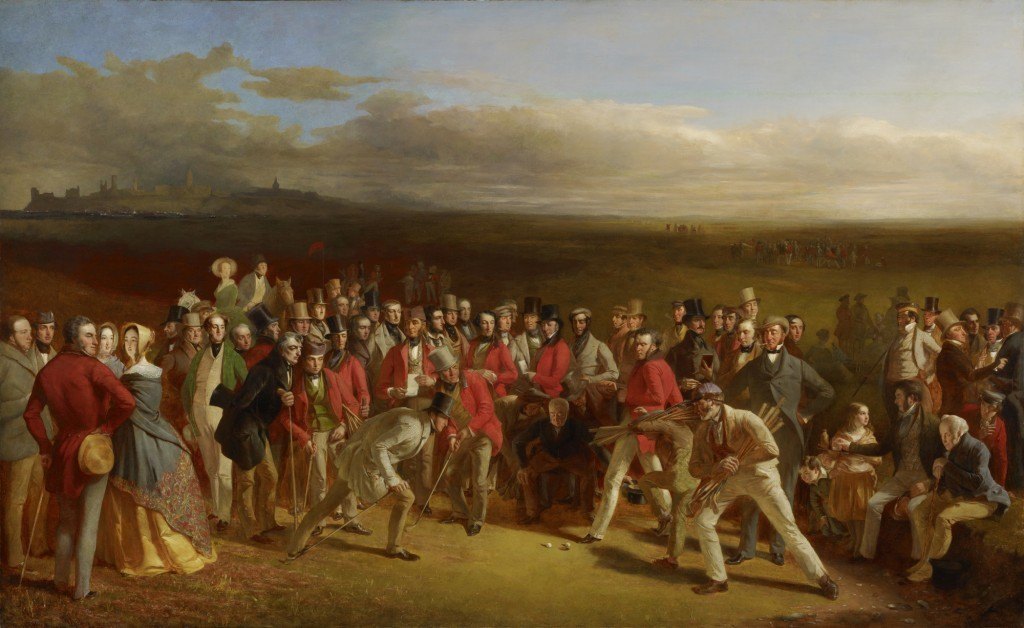 The Art of Golf

Above: Charles Lees, The Golfers, 1847, oil on canvas, 51 1/2 x 84 1/4 inches, National Galleries of Scotland, Edinburgh, purchased with the assistance of the Heritage Lottery Fund, The Art Fund, and The Royal and Ancient Golf Club of St Andrews, 2002, PG 3299

The Art of Golf is the first major museum exhibition in the United States devoted to this popular game. Organized by the High Museum of Art in Atlanta and the National Galleries of Scotland, this exhibition spans four centuries of golf and features approximately 90 works by artists such as Rembrandt van Rijn, Hendrick Avercamp, Sir Henry Raeburn, Childe Hassam, George Bellows, Norman Rockwell, Andy Warhol, and the celebrated photographer Harold Edgerton.

The highlight of the exhibition is Charles Lees’ extraordinary painting, The Golfers (1847), which depicts the Old Course at St. Andrews with fifty-four spectators at a famous foursome match. This commanding picture is seven-feet wide and is considered by many to be the world’s greatest golfing picture. This celebrated canvas has never traveled to the United States prior to the exhibition’s opening at the High Museum of Art last February.

The Art of Golf takes a chronological approach beginning with images of kolf, a cousin of the modern game, in seventeenth-century Dutch landscape and genre paintings. It includes an impressionistic rendering of the Maidstone Club, East Hampton, in Dune Hazard, No. 2 (1922) by Hassam and a striking painting of a California golf course by George Bellows. The accomplishments and popularity of Robert Tyre “Bobby” Jones, Jr. (1902-1971) are highlighted with several portraits and photographs of the golf icon. Quintessential modern American artists are also represented with a painting of Jack Nicklaus by Warhol from his “Athlete Series,” and an enigmatic drawing of Arnold Palmer by Larry Rivers.

The Art of Golf will entice new and old enthusiasts for the game and brings together rare and remarkable works of art to celebrate what Bobby Jones called “a game of considerable passion.”

The Museum of Fine Arts venue of The Art of Golf  sponsors: