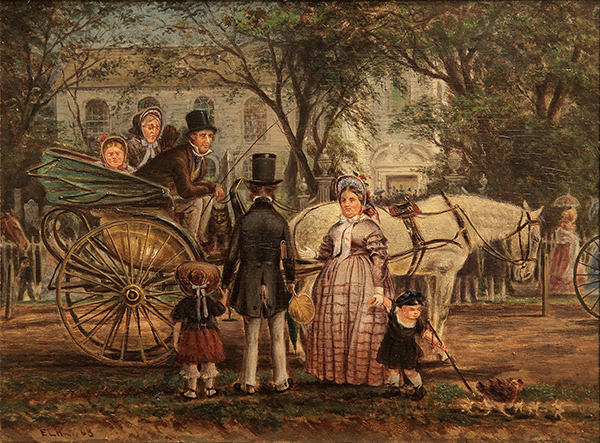 A Chat After Meeting

Henry could probably be best classified as an American “regionalist” painter since the majority of his work from the 1880s onward contains scenes of country life around Cragsmoor and Elenville, But is considered by many to be one of America’s leading historical and genre artists of the late 19th and early 20th century. His reputation today is based on a lifetime spent painting what is best described as “Americana”—incidents in early American history coupled with the traditional habits and customs of daily life, both in the early 18th century and during Henry’s lifetime. His biographer, Elizabeth McCausland, noted that “Henry’s pictures record the slow tempo of farm life before (the) modern mechanization of agriculture…. the easy, unhurried pace of existence (where) men have time to stop and lean on the rail fence and chat with a neighbor passing by.”