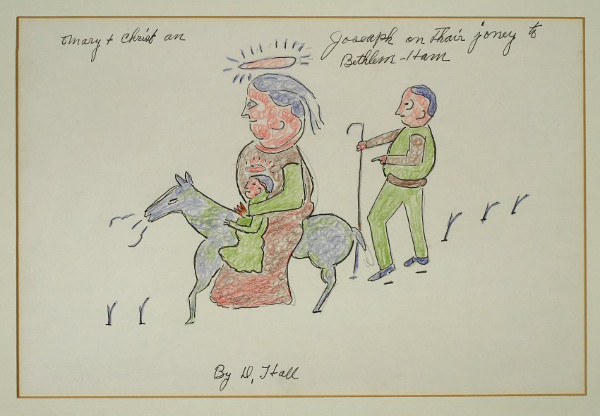 Mary, Christ, and Joseph on Their Journey to Bethlehem

Gift of Martha and Jim Sweeny

One of thirteen children, Hall was born into a tenant farming family in Athens, Georgia. He showed an interest in art at an early age, but his father disapproved of such “impractical interests.” Hall served in the Army during World War II, and was deeply influenced by the art he saw in Europe. After his return to Athens, he worked a variety of jobs, including one for a concrete block manufacturer. From this experience, Hall produced concrete sculptures, and later his materials expanded to also include metal and wood. Arthritis eventually prevented him from constructing sculptures, which ultimately led him to drawing. Here we see the prevalence of biblical themes in Hall’s work.