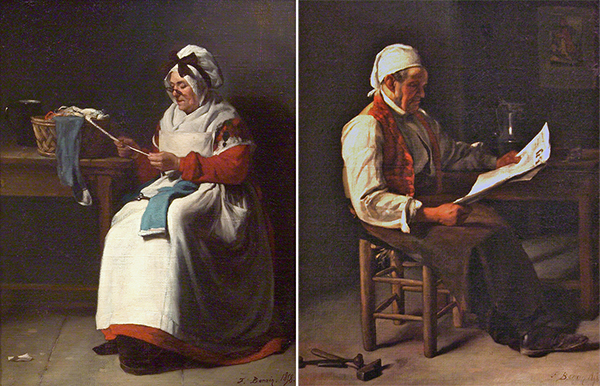 Reading the News and Darning

Realist paintings inspired by daily life such as these contrasted with officially accepted paintings that depicted history, myth, allegory, and religion. Led by the French painter Gustave Courbet, who asserted “I will paint an angel when I see one,” the Realists focused on depicting the empirical world surrounding them. Genre paintings reflected a spirit of democratization that began in seventeenth-century Holland. Bonvin studied old master painting in the Netherlands, where he lived for a time. The sparse domestic interior here suggests that these are people of the working class—the artist’s origins, as well—and demonstrate a respect for the activities of working people. They partly comprise and foster new national myths, important subjects for artists in an age of political and social revolution.