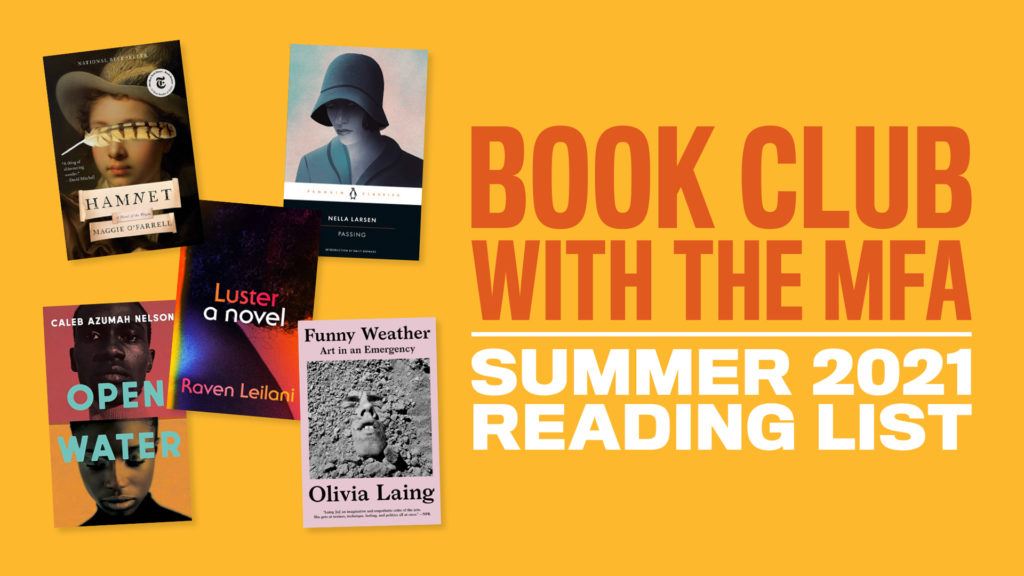 While Book Club with the MFA is on hiatus, we’re scouring bookstores across the globe looking for great new releases to complement our slate of upcoming exhibitions. In the meantime,  feel free to check out our new MFA Summer Reading List! Explore past book club selections, new and notable art books, and books that just missed the cut over the past year. Please join us back at the museum—in person—beginning Oct. 2021. Happy reading!

On Aug. 11, 1596, William Shakespeare’s only son, Hamnet, was buried. He was 11 years old. Almost nothing more is known about the boy’s brief life. No letters or diaries—if there were any—survive. The world’s greatest poet did not immortalize his lost child in verse. Award-winning author Maggie O’Farrell’s 2020 novel breathes full-blooded life into the story of a loss usually consigned to literary footnotes and provides an unforgettable vindication of Agnes, a woman intriguingly absent from history. Originally slated to celebrate our exhibition, Art of the Stage: From Picasso to Hockney, Hamnet was culled from the list by the pandemic and the museum’s closure in early 2020.

First published in 1929, Passing is only one of two novels written by American author Nella Larsen. Set primarily in New York City’s Harlem neighborhood in the 1920s, the story centers on the reunion of two childhood friends—Clare Kendry and Irene Redfield—and their increasing fascination with each other’s lives. The title refers to the practice of “racial passing,” and is a key element of the novel as Clare’s attempt to pass as white for her husband, John (Jack) Bellew is a catalyst for tragic events. Larsen’s exploration of the race was informed by her own mixed racial heritage and the increasingly common practice of racial passing in the 1920s. Praised upon publication, the novel has since been celebrated in modern scholarship for its complex depiction of race, gender, and sexuality, and is the subject of considerable scholarly criticism.

Funny Weather brings together a career’s worth of Olivia Laing’s writing about art and culture, examining their role in our political and emotional lives. She profiles Jean-Michel Basquiat and Georgia O’Keeffe; reads Maggie Nelson and Sally Rooney; writes love letters to David Bowie and Freddie Mercury; and explores loneliness and technology, women and alcohol, sex and the body. In this remarkable, inspiring collection of essays, which the MFA Book Club read last July, the acclaimed writer and critic make a brilliant case for why art matters—especially in the turbulent political weather of the twenty-first century.

The strange relationship between Edie, a struggling 23-year-old Black artist, and a middle-aged white couple she moves in with, is the focus of this striking debut novel from U.S. writer Raven Leilani— released in the US in 2020, and in the UK in 2021. Described by The New Yorker as “a highly pleasurable interrogation of pleasure,” Leilani skewers twenty-first-century sexual, racial, and office politics with a dry, dark, and frequently absurd comic style.

With his debut Open Water—ostensibly a love story between a young photographer and a dancer—Azumah Nelson uses his central romance to explore themes of race, class, and London life while taking risks with form (the narrative is in the second-person, neither central character is named). It’s a celebration of Black artistic excellence, weaving in the photography of Roy DeCarava, Barry Jenkins, Solange, and Kendrick Lamar; and even Zadie Smith makes a cameo. It is described as a “bracing and nuanced exploration of black masculinity,” while The Guardian praises Azumah Nelson’s “elegance of style” and “exciting ambition.”