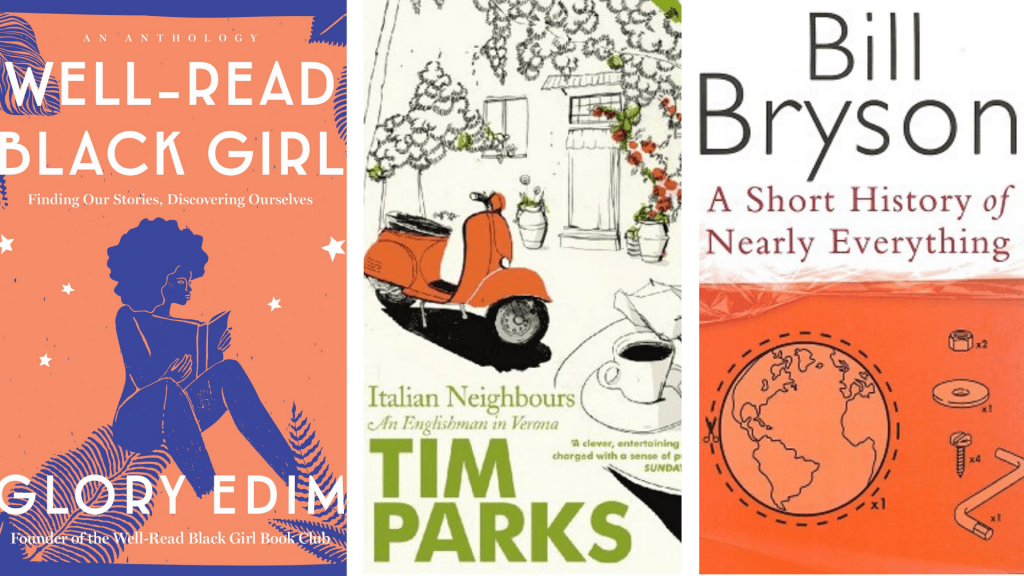 Well-Read Black Girl by Glory Edim: This collection of essays grew out of the popular Well-Read Black Girl book club founded by Edim. In both, she finds stories originating from women of color that speak to the experiences both past and present (and let’s not forget the future) of women of color. The question she asks of her contributors is simple, yet profound: When did you first see yourself in literature? And do they deliver!

Historic African American Neighborhoods of St. Petersburg by Jon Wilson and Rosalie Peck: There’s so much I didn’t know about our city.  It’s amazing to hear about neighborhoods like Pepper Town and Methodist Town, and streets like Bolita Alley, as well as the people living there who pushed for schools, civic engagement and equality.

The Revenge of Analog: Real Things and Why They Matter by David Sax: I love this book and recommend it to everyone. The digital world has made communication faster, transactions more efficient, and shopping more convenient—but the need for connection to what is real and tangible is at the heart of why there is a growing market for everything from vinyl records to paper books. Analog is cool again. Sax is a terrific reporter who writes about how we shop, think, and interact with each other, and he makes the case for the limited appeal of the purely digital life. As a museum director, I am a big fan of the analog experience. Art invites you to look carefully, at texture, color, weight, presence. The digital image is a shadow of the artist’s intended experience for you. Get to what’s real.

A Short History of Nearly Everything by Bill Bryson: This is a book about how it happened—in particular how we went from there being nothing at all to there being something, and then how a little of that something turned into us, and also some of what happened in between and since. Bryson helps us to understand the science of how we are here and how we have gotten to where we are now with a combination of science, wit, and charm!

Memoirs of the Court of Marie Antoinette, Queen of France: Being the Historic Memoirs of Madam Campan, First Lady in Waiting to the Queen by Jeanne Louise Henriette Campan: Alhough I am fascinated by all aspects of art history, I am particularly drawn to imagery produced in Europe during the 18th and 19th century. While not focused on art, this book does give a kind of insider’s access to the court of Louis XVI and Marie Antoinette before and during the French Revolution.

Team of Rivals: The Political Genius of Abraham Lincoln by Doris Kearns Goodwin: True to my geeky and yet country roots, I have loved Civil War history since I was a child! And this book allows you to delve into that. Goodwin has an amazing gift for looking at what could be pretty dry historical facts, old photographs, archival material, and surviving documents and then using this to resurrect major historical figures—complete with flaws and foibles. Team of Rivals is about Lincoln’s brilliance as a leader, and particularly how he created a cabinet, not by repaying political favors, but by choosing the best people possible for the crisis then facing the country. It’s an extraordinary evocation of the US during the turbulent Civil War period, and how strong, visionary command helped guide the nation.

Ways of Seeing by John Berger: This highly influential, yet easily digestible, paperback was published in 1972, on the heels of  Berger’s popular BBC miniseries of the same name. His thesis is clear: “The way we see things is affected by what we know or what be believe.” Berger used visual culture and art history to examine the social, political, and historical influences that affect the way we see the world around us. In the words of British feminist art historian Griselda Pollock, John Berger “breached polite taboos” and used art history as a tool for the “analysis of power and the deconstruction of classed, raced, and gendered meanings.” Although no longer groundbreaking—a socio-political reading of artworks is now the norm—Ways of Seeing continues to be an inspiring, engaging text that reminds us of the power of visual culture.

An Italian Education by Tim Parks: Tim Parks is an Englishman living in Italy with his family in a village near Verona. It is about what makes someone Italian, and by extension, what actually forges a national identity. Witty, and often funny, Parks is an acute observer of small but telling moments.

Italian Neighbours by Tim Parks: Immerse yourself in a parade of peculiar Italian customs and personalities. Throughout, a larger question is addressed, “Is culture inborn or learned?”

The Last Castle: The Epic Story of Love, Loss, and American Royalty in the Nation’s Largest Home by Denise Kiernan

For history buffs, here are two great books about collectors, their lives, their interests, and the times in which they lived. Double Vision is a biography of art collectors, the de Menils, and the artworld of the 20th century. The Last Castle is a story of one of the wealthiest and most prominent families in the United States, the Vanderbilt, and the era during construction of the famed Biltmore House.