What We’re Reading in April: Fiction 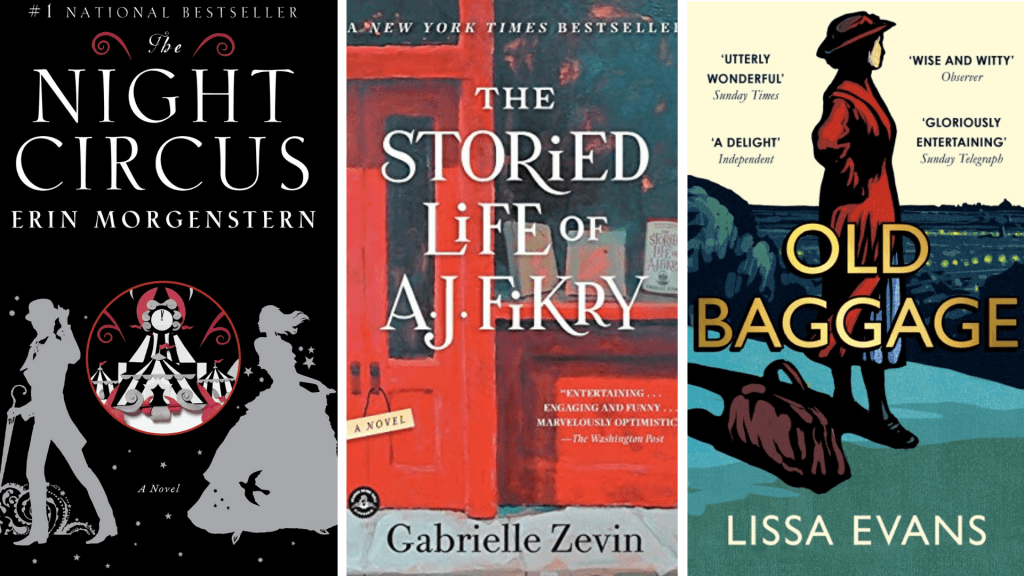 The Night Circus by Erin Morgenstern: Set mostly in Victorian London, The Night Circus is one of the most imaginative stories I’ve ever read — a great escape! The mysterious ‘circus of dreams’ includes truly magical environments, including a blooming garden made of ice; a cloud maze where you step off ledges and softly land on the next level; a room of perfume bottles with captured scents (think densely wooded forests and sandy beaches) that transport you to those places. But beyond a traveling show, The Night Circus is a magical and powerful playing field for a competition (to the death) between the protégées of two powerful magicians. These protégées don’t know the rules, only that they are bound to the game. What happens when they fall in love?

Old Baggage by Lissa Evans (April’s Centennial Book Club at the MFA selection): Mattie Simpkin believes in the benefits of physical exercise, the great outdoors and that, despite the changes brought about by the women’s suffrage movement she was a part of, the fight needs to carry on if women are to achieve true equality. The government’s response to their protests – imprisonment, force-feeding – has wrought physical and psychological damage in some cases. In trying to set right what she sees as the mistakes of the past, what Mattie doesn’t realize is that she’s not the only one with emotional “old baggage.”

In Search of Goliathus Hercules by Jennifer Angus: Jennifer Angus brought the amazing and thought-provoking exhibition, The Grasshopper and the Ant and Other Stories as told by Jennifer Angus to the MFA last fall. My son loved this exhibition so much and was delighted to find that Jennifer Angus was also the author of this children’s book.  It’s an exciting tale that takes place in 1890 about a 10-year-old boy named Henri Bell who has a very special gift — he can speak to insects. Henri embarks on an epic journey to find the mythical giant insect known as Goliathus Hercules, making friends both insect and human along the way.

How to Invent Everything: A Survival Guide for The Stranded Time Traveler by Ryan North: This is a hilarious and humbling book that asks the question, “what would you do if a time machine hurled you thousands of years into the past… and then broke?”  North explains how to rebuild civilization from the ground by explaining the technologies needed at each stage to rebuild the world as we know it today. Highly irreverent, entertaining, and educational!

The Storied Life of AJ Fikry by Gabriella Zevin: This book tells a story about a curmudgeon of a man who is a recent widower, and lives alone on a small island where he owns a bookstore that is experiencing the worst sales in its history. He suffers yet another significant loss when he discovers someone has stolen his rare collection of Edgar Allan Poe poems and replaced them with a mysterious package. This unexpected arrival gives AJ the ability to start over with books once again — the lifeblood of his world. It is surprising and moving; it is a story of transformation, second chances, and an affirmation of why we read and why we love.

Measuring the World by Daniel Kehlmann: Measuring the World is the ambitious debut novel by Austrian writer Daniel Kehlmann. This well-researched historical fiction recounts the remarkable genius of two renowned men who set out to “measure the world” during the Age of the Enlightenment. Kehlmann deftly weaves together the lives and works of the aristocratic Prussian geographer, naturalist, and explorer Alexander von Humboldt, and the brilliant and reclusive German mathematician and physicist Carl Friedrich Gauss. I found it a fascinating read about von Humboldt’s famous scientific expedition to the Americas, and Gauss’s incredible academic contributions to the fields of astronomy, geometry, and physics.