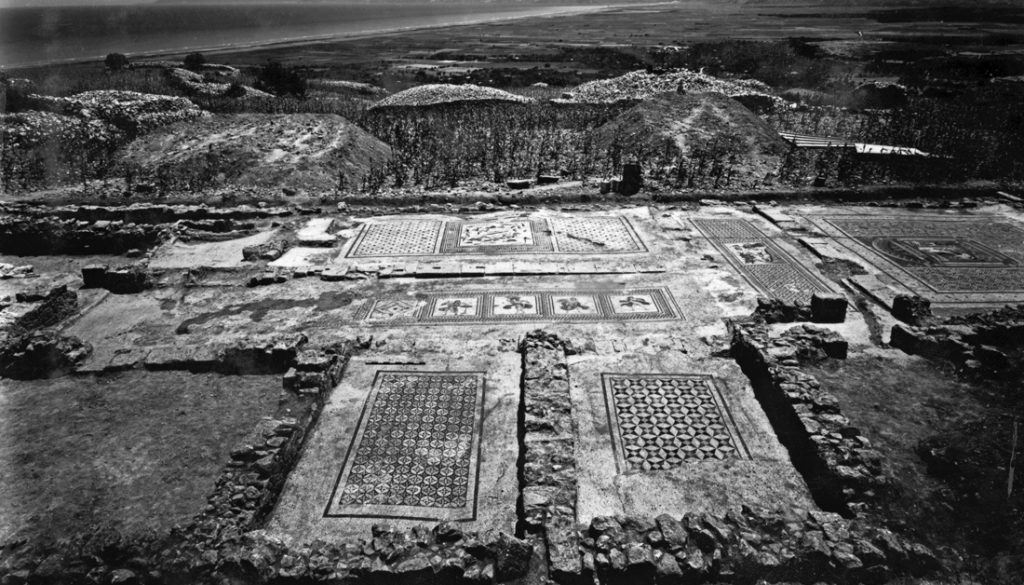 Excavation of Antioch-on-the-Orontes, View of building excavated down to mosaic level with Mount Casius in background, House of the Drinking Contest, 1939

The Museum of Fine Art’s five mosaics from ancient Antioch, one of the most important cities of classical antiquity, were acquired in 1964 by the first director Rexford Stead, and were among the earliest acquisitions at the museum. They were purchased directly from Princeton University, a founding member of the Committee for the Excavation of Antioch, which also included representatives from the Musées Nationaux de France (Louvre), the Worcester Art Museum, and the Baltimore Museum of Art. The excavation of the site, located in northern Syria to the east of the Orontes River (today the modern city of Antakya in Turkey), began in 1932 and ended in 1939 after the outbreak of WWII and the annexation of the area by Turkey.

Antioch Reclaimed: Ancient Mosaics at the MFA is an ambitious, three-phase initiative to conserve, exhibit and permanently install these precious survivors from Antioch, one of the four greatest cities of the Roman Empire, alongside Rome, Alexandria, and Constantinople. The first phase involves the excavation of three of the mosaics, one from the basin of the fountain in the Membership Garden, and of two others under the lawn at the east side of the museum, followed by the conservation of the entire group in an outdoor conservation laboratory on view to the public. The second is a temporary exhibition placing the MFA’s mosaics within the larger tradition of Greco-Roman mosaic art, scheduled for December 2021. In the final phase the mosaics will be installed permanently, possibly within the Membership Garden, as part of a complete renovation of that much-admired space. At the MFA St. Petersburg, the Antioch mosaics can be appreciated within an encyclopedic overview of art history, across cultures, from antiquity to the present.