Collectors Circle Presents: A Night at the Carlyle 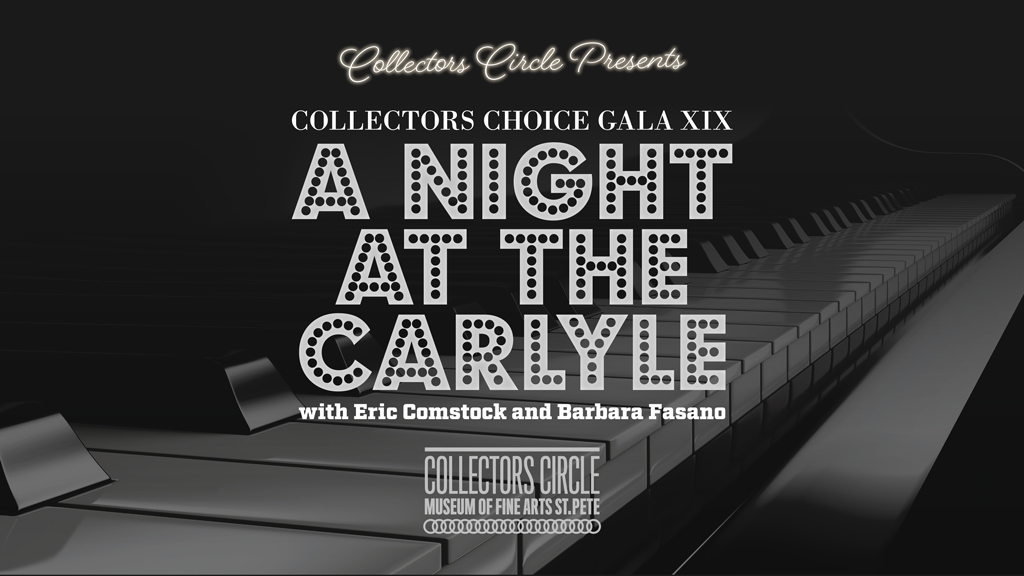 In celebration of over 25 years of support of the Museum of Fine Arts, St. Petersburg, the Collectors Circle cordially invites you to Collectors Choice XIX “A Night At The Carlyle.” Take a trip back in time to old New York as the Vinoy Renaissance Sunset Ballroom transforms into the legendary setting of New York’s premier Carlyle Hotel.

Members and non-members alike can register for this festive Collectors Choice XIX “A Night At The Carlyle” event!

Enjoy cocktail hour with a signature cocktail, a seated gourmet dinner, art selection, and live music capped with our Winter Libations Pull featuring outstanding wines, whiskeys, overnight stays, and so much more. Dazzling live entertainment will be provided by award-winning New York performers Eric Comstock and Barbara Fasano, accompanied by bassist Mark Neuenschwander. They will be performing songs from the Great American Songbook, a canon of significant early 20th century popular songs and show tunes. From artists like Cole Porter to Carole King and Leonard Bernstein to Paul Simon, these songs will touch your heart, feed your memories, and keep your feet tapping!

Barbara Fasano, who is in the top tier of todays’ jazz vocalists, “effectively channels the spirit of Lena Horne and Barbra Streisand” according to Will Friedwald of the Wall Street Journal. Her performances and recordings have won her three New York Bistro Awards, seven MAC Awards, a New York Nightlife Award, plus MAC’s Female Vocalist of the Year.

The New York Times calls them “Exhilarating” and so will you. Together they illuminate the room with their dazzling musicianship.

Puttin On The Ritz

The Mission Statement of the Collectors Circle, a support group of the MFA since 1995, is to purchase for and/or preserve/ restore artwork in the MFA Collection for the enjoyment of museum members and the public. The Collectors Circle brings together collectors, non-collectors, museum benefactors, and art aficionados for fascinating programs and study trips which range from fundraising events, study trips, and lectures. Over the past 25 years the Collectors Circle has gifted 41 works of art from a range of time periods, styles, and media to the museum. Among our most spectacular gifts are Kehinde Wiley’s Leviathan Zodiac (The World Stage: Israel), 2011 which marked our 25th Anniversary, and Childe Hassam’s The Home Sweet Home Cottage East Hampton, Long Island, which marked our 10th anniversary celebration.