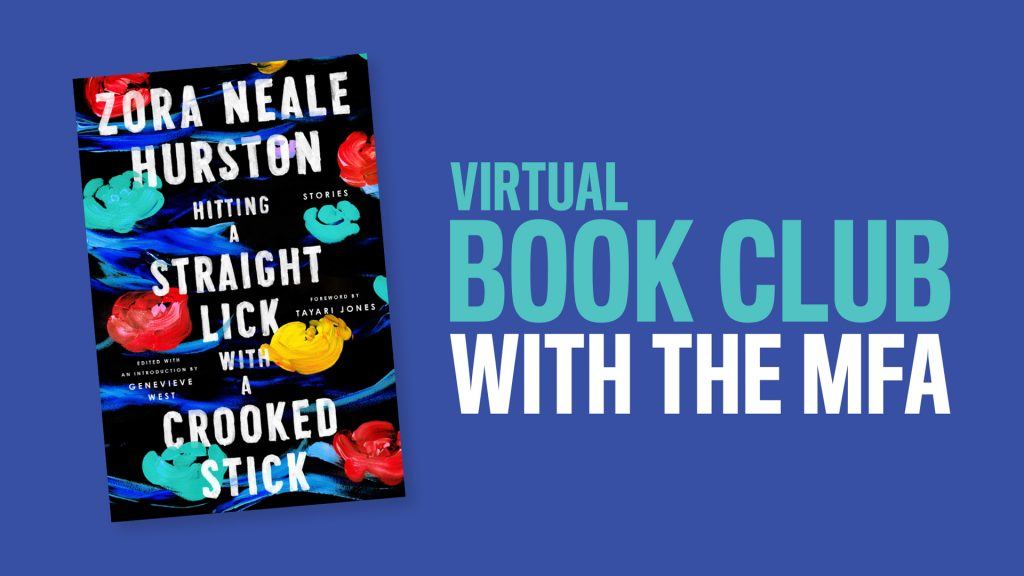 In 2020, the Book Club at the MFA joins in the national celebration of the ratification of the 19th Amendment, which granted women in the United States the right to vote. And now we’re doing it virtually, with Zoom. Join us for exciting monthly readings by or about female authors, artists and activists, with discussions centered on topical issues and themes universal to all: empowerment, artistic and creative excellence, and the push for equality for all.

This book club is free but registration is required and will be limited to 50 participants. Register by clicking here.

Anthropologist and author Zora Neale Hurston explored the intersection of race, class, and gender through her novels, plays, stories and films. As a young woman growing up in Eatonville, FL, one of the earliest self-governing and all black communities in Florida, Hurston saw African-American culture thriving under black leadership, including that of her father, who served as Mayor and pastor of Macedonia Missionary Baptist church. Her early life experiences, unfettered by the racism typical of most Southern cities, provided her with the confidence to use her own life and the lives of those around her as a blueprint for her work, celebrating black culture and tradition. After attending Howard University, and co-founding the university’s student newspaper The Hilltop, she graduated from Barnard College with a BA in Anthropology. Between the mid to late 1930s, Hurston published five works, beginning with her first published work in 1934, Jonah’s Gourd Vine. After being awarded a Guggenheim Fellowship to study in Haiti, Hurston published her most renowned novel in 1937, Their Eyes Were Watching God. Hurston was able to bring to light larger inequities experienced by African Americans through her focus on nuances of courtship, marriage, and relationships in mostly rural, but also urban settings in Harlem. In the later part of her life, Hurston took jobs where she could, working as a freelancer for multiple publications, continuing to create enduring African American characters and stories through her essays and articles. But when her work slacked, she was forced to find work as a maid. After suffering a stroke in 1959, she moved to a nursing home in Fort Pierce and passed away at the age of 69. Hurston is remembered and widely acclaimed as a powerful humanizing chronicler of 20th century southern black life – the stories and lives of formerly enslaved Americans. This publication pulls together previous works in a compelling book, which proves that her work is as relevant as ever.

Hitting A Straight Lick with a Crooked Stick is a collection of 21 Hurston stories, among them eight newly rediscovered Harlem Renaissance tales from the 1920s and 30s, which were recovered from the archives of forgotten periodicals. Each of the 21 stories are enlivened by the author’s wickedly funny, sprightly dialogue, and the editors of the collection have, true to Hurston’s writing, left alone her trademark grammatical idiosyncrasy and Florida vernacular, giving a timeless feel to her work.

This book is available at our Book Club partner Tombolo Books and other retailers.

Every day, even while our doors are closed, we are “open” online.  Since the MFA doors temporarily closed, so many of you have asked how you can help during this critical time. Here are a few ways you can support your museum today: