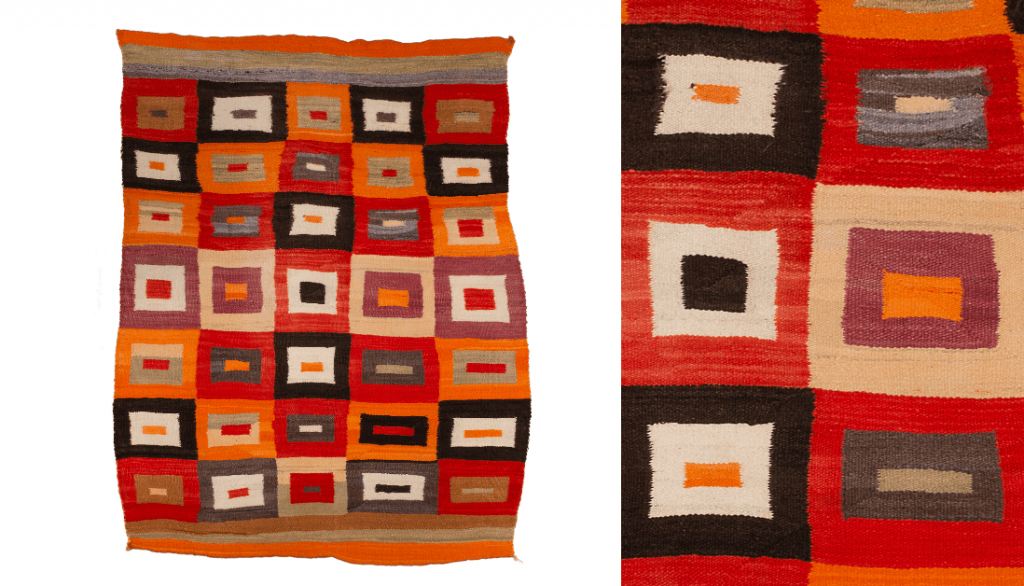 This exhibition celebrates the individualism and flair for experimentation in Navajo textiles from the last quarter of the 19th century. Featuring over 80 dazzling works, these textiles reflect ideas and events the Navajo people experienced between 1863 and 1868, the hard years of their imprisonment in the Bosque Redondo, and their subsequent return to a reservation. During this time, weavers absorbed stylistic features of Hispanic textiles and began to work with new materials such as aniline dyes and mass-produced Germantown yarns. Commercial products at trading posts sparked additional design ideas for weavers. This touched off their unique experiments with color and design. No longer weaving for their traditional trade partners, and working at a time when outside market influences were at a low point, the Navajo were free to experiment with form and color. In addition, as commercial woven garments and cloth became more common, creating blankets and rugs offered weavers a chance to sell to traders for newly expanding markets.

Color Riot! was developed by the Heard Museum (Phoenix, Arizona) which is devoted to collecting and studying Native American Arts of the Southwest. The exhibition was shaped by the Heard’s curatorial staff with the participation of three Navajo women under the auspices of the Andrew W. Mellon Foundation: Ninabah Winton (Diné); Velma Kee Craig (Diné); and Natalia Miles (Diné/Akimel O’Otham/Apache). These three fellows were involved with all aspects of the exhibition, from concept development to object selection, textile preparation, research, and interpretative texts. Carol Ann Mackay, a noted scholar of Navajo textiles, is also a co-curator of the exhibition.

Color Riot! was organized by the Heard Museum, Phoenix, Arizona.

Made possible by Tinney Rug Cleaners, State of Florida Division of Cultural Affairs and the Florida Council on Arts and Culture, with additional support from Bank of America and the Garth Family Foundation.