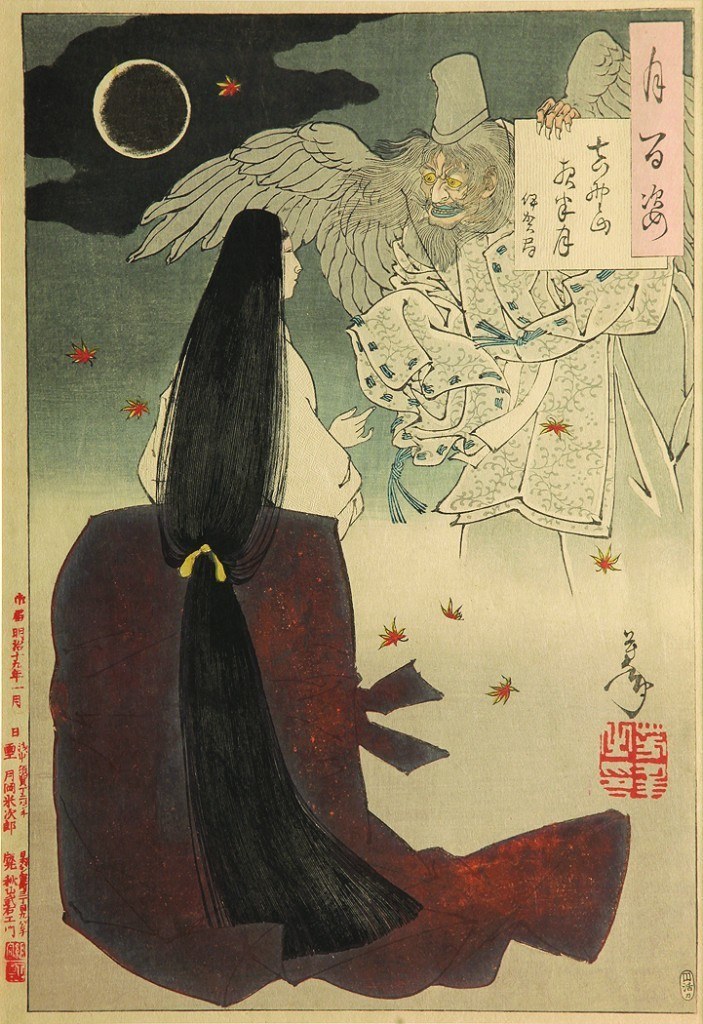 Images of the Floating World and BeyondJapanese Woodblock Prints

Above: Tsukioka Yoshitoshi, Mount Yoshino Midnight Moon from the series One Hundred Aspects of the Moon, 1886, color woodblock print

Ukiyo-e, or “images of the Floating World,” depict hedonistic pleasures in ancient Japan—the world of geishas, kabuki actors, and sumo wrestlers. This exhibition introduces this transient world through Japanese prints of the eighteenth to nineteenth centuries by such celebrated artists as Utamaro, Hokusai, Hiroshige, and Yoshitoshi. It also explores the Japanese fascination with ghosts and demons, a love of landscapes, and images of heroic deeds by Japanese warriors.

With Japan’s opening to the West in 1854, Western style began to influence the country’s art and culture, reflected in prints of the Meiji Period (1868-1912). In turn, Japanese prints found their way to Europe and were admired by many artists, including Impressionists like Claude Monet, who developed a large collection.

At the beginning of the twentieth century, Japan experienced a print revival with shin-hanga (new prints). This continued traditional ukiyo-e themes and the collaborative workshop system, in which artists worked with carvers, printers, and publishers. At the same time, a different art movement, sosaku-hanga (creative prints), emerged. Inspired by modern, international currents, these artists remained the sole creators of their prints. Key examples are on view in the exhibition, which takes visitors into the twenty-first century and highlights the impact of Japanese printmaking in Europe and America today.

Japanese prints were among the first gifts to the MFA and are some of the most recent donations for the 50th anniversary. Under Dr. John Schloder’s leadership, the Museum greatly expanded and enhanced its collection of Asian art and put more works on view in two galleries. Now Director Emeritus, Dr. Schloder is curating this show with Stephanie Chill.