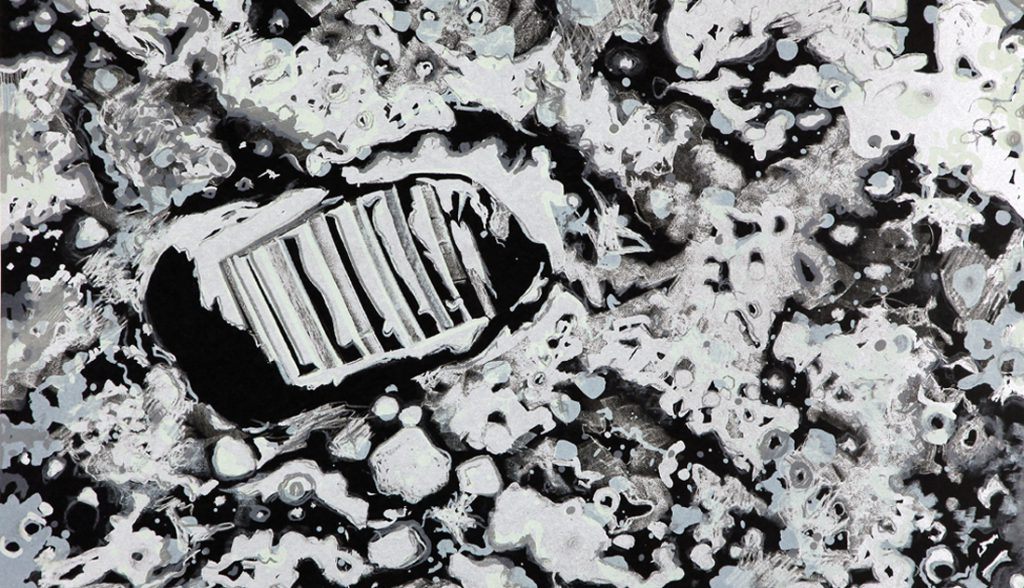 This exhibition examines how artists have responded to the history of space travel. The relationship between art and science is a fascinating one, and Moon Museum allows for an exploration of the history of Experiments in Art and Technology (E.A.T.), the influential non-profit organization founded in 1967 to promote collaboration between artists and engineers.

NASA carried out its second successful lunar landing mission with Apollo 12. In space from November 14-24, 1969, astronauts Peter Conrad, Alan Bean, and Richard Gordon brought the first color television camera to the moon’s surface, and studied the Surveyor 3, an unmanned probe that reached the moon’s surface on April 20, 1967. The mission also achieved an unexpected advancement in contemporary art: the establishment of the Moon Museum.

Conceptual artist and sculptor Forrest Myers had a grand ambition to leave a work of contemporary art on the moon’s surface, and achieved his goal through the help of NASA workers and Bell Telephone Laboratories (a partner in E.A.T.) in New Jersey. He solicited contributions from leading contemporary artists of the time: John Chamberlain, David Novros, Claes Oldenburg, Robert Rauschenberg, and Andy Warhol. Drawings by these artists were printed onto a small ceramic tile, just 3/4″ x 1/2″ in dimensions. The tile was affixed to the landing module of Apollo 12, left on the moon’s surface after the spacecraft returned to Earth. Forty copies of the tile were made, and one is in a private collection in Fort Myers, Florida, which will be loaned to the Museum of Fine Arts.

Also featured in the exhibition will be Lowell Nesbitt’s Moon Shot (1969), a portfolio of 6 prints based on the moon’s surface, and part of the Museum’s permanent collection. Nesbitt was the official artist for NASA during the Apollo 9 and 13 space flights.