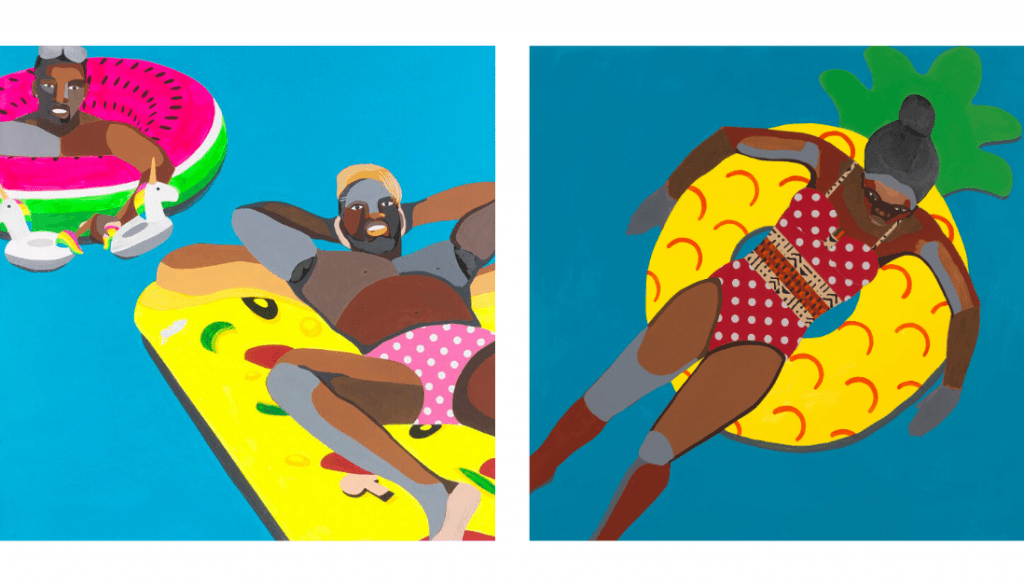 Derrick Adams (American, b. 1970) examines the power of popular culture on one’s self-image, and mines his personal, as well as broader, African American histories to celebrate under-recognized, often prosaic, aspects of Black life. Derrick Adams: Buoyant features the artist’s Floaters series created between 2016-2019, wherein the Baltimore-born artist depicts Black men, women, and children relaxing on bright blue waters in colorful plastic floaties. There are no architectural or landscape references in the paintings, emphasizing a calm sense of buoyancy.

Adams methodically fills the many voids and omissions of Black culture in American mass media, with the goal of normalizing images of African American leisure, joy, and love. Indeed, what may come across as a banal scene instead takes on resonance because of the racialized bodies; systemic racism has created a world in which we so rarely see a Black figure in repose. Inspired by a 1967 Ebony magazine article and photo spread focused on Dr. Martin Luther King’s Jamaican vacation—featuring images that were surprising to the artist—Adams creates a more accurate and fuller presentation of Black life that reclaims lost histories of leisure. The Floaters series also debunks cultural stereotypes of Black people’s relationship with swimming, and may stir memories of a time when Black people in recreational water was not a welcomed sight as America’s pools and beaches were as segregated as schools and restaurants. By broaching these missing conversations, images, and histories, Adams ensures a broadened representation of African American life that is imperative to beginning to understand just how much has been left out.

Derrick Adams: Buoyant at the MFA will be the artist’s first solo museum exhibition in the Southeast.

Adams received his MFA from Columbia University, BFA from Pratt Institute, and is a Skowhegan School of Painting and Sculpture and Marie Walsh Sharpe alumnus. He is also the recipient of the 2018 American Family Fellowship from the Gordon Parks Foundation, a 2009 Louis Comfort Tiffany Award, and the 2014 S.J. Weiler Award. His artwork is in the permanent collections of public institutions including the Hudson River Museum, NY; The Metropolitan Museum of Art, NY; Museum of Fine Arts, St. Petersburg, FL; Studio Museum, NY; Virginia Museum of Fine Arts; and the Whitney Museum of American Art, NY.

Derrick Adams: Buoyant is organized by the Hudson River Museum in association with the Museum of Fine Arts, St. Petersburg, and curated by James E. Bartlett, founder of Open Art and former Executive Director of the Museum of Contemporary African Diasporan Arts (MoCADA), in Brooklyn, New York, and Laura Vookles, Chair of the Hudson River Museum’s Curatorial Department. A fully-illustrated catalogue accompanies the exhibition, with essays by James E. Bartlett, art critic and writer Antwaun Sargent, and an interview between Adams and artist Mickalene Thomas.

Made possible by James G. Sweeny with additional support from Ann and William Edwards.