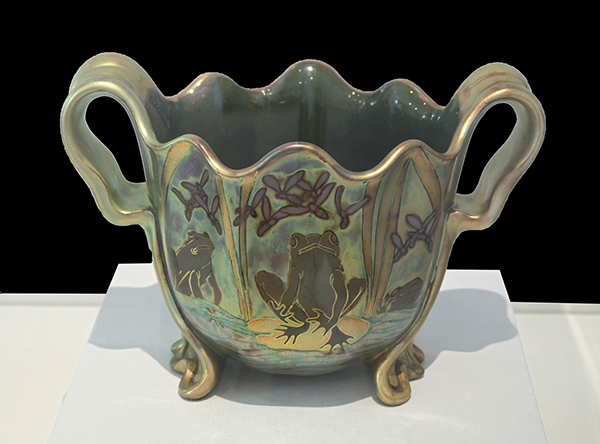 Zsolnay has been in continuous operation since its founding. By 1900 it was known throughout Europe and the United States for its stunning Art Nouveau designs with distinct iridescent glazes, also termed lustreware.

In 1853 Miklós Zsolnay (1828–1900) established a ceramic factory in Pécs, Hungary. Its first international success came at the 1873 World Exhibition in Vienna and resulted in a great number of international orders. Vienna was followed by a triumph at the 1878 World’s Fair in Paris, where Zsolnay was awarded a Gold Medal. By 1900 it had 1000 employees.

Lustreware was first developed during the 9th century in what is now Iraq. It uses a lead-based glaze with silver and copper paints and was the foundation embellishing late 19th-century ceramics, especially during the era of Art Nouveau, like Zsolnay’s works.