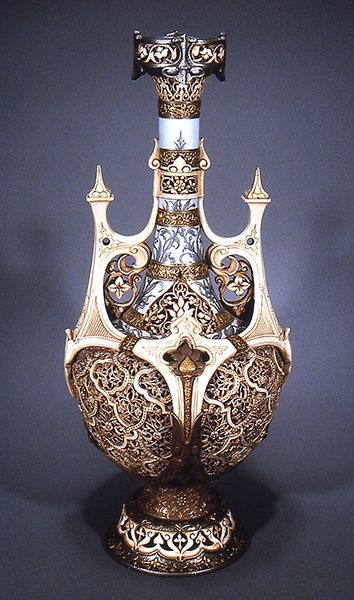 Gift of Mrs. Beulah Temko in memory of David Coates

Although this vase may appear gaudy to the modern viewer, it is perfectly allied to Victorian taste, with its eclectic and grandiose appearance. In the late 19th century, the British Empire was at its height, and Queen Victoria reigned over its colonies worldwide. A tendency to appropriate the traditional styles of art in other countries was standard practice, as in this Islamic Revival vase. Worcester Porcelain was noted for its interpretations of Gothic, Italian, and Persian styles. While the vase’s rim mimics metal, the intricate pierced body imitates ivory, creating a trompe-l’oeil effect.